1801: The long war against Napoleon rages across land and sea.  Alexander Clay, captain of the new Royal Navy frigate Griffin, is ordered to Copenhagen, carrying diplomat Nicholas Vansittart.  While Captain Clay gets the new frigate seaworthy and its crew practiced at naval warfare, Vansittart has more than one mission needing Griffin’s service.  To Clay’s dismay, Griffin and all who sail on her have embarked on the game of spies, which requires more subtlety than ordering all guns to fire at enemy ships. England is trying to avoid war with Denmark, and persuade Denmark to ally with England against Napoleon’s armies.  The combination of vivid life aboard the frigate plus the shadowy world of espionage should be a compelling story; on that count, the novel’s a bit disappointing.  The author shines in the naval action scenes during the battle of Copenhagen, there are clever espionage subplots, and if you don’t know the basics of keeping a frigate in good shape by the time you’ve read In Northern Seas, it’s not the author’s fault.

However, although the author’s knowledge of his chosen period is impressive, I found the novel less than gripping.  While there’s a lot of travel and action, it lacks a strong plot arc, and I never felt I really knew Captain Clay and his crew.  Still, In Northern Seas is a worthy member of the “British Navy Captains Gallantly Fighting the Napoleonic War at Sea” club. 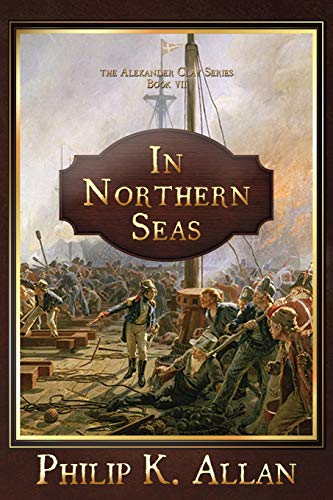