Fourteen-year-old Mateo is desperate to escape Cuba and an abusive father scarred by the war with Spain. The Americanos are promising extravagant pay to recruits who will travel to Panama to dig a marvelous canal through the jungle – a project billed to become the Eighth Wonder of the World. But when Mateo risks everything to travel to Panama, he finds himself trapped in a cruel version of Apartheid – where workers struggle in life-threatening conditions, enslaved by their contracts and their poverty, and paid in silver instead of gold because of the color of their skin.

Newbery Honor-winning poet Margarita Engle once again brings her lush and lyrical voice to tell a little-known story of Caribbean history. In poems that seldom employ more than three or four words per line, Engle captures the voices of the Cubans, Jamaicans, and native Panamanians impacted by the building of the Panama Canal – as well as the voice of the forest itself. In interludes told by a Builder Ant, a Howler Monkey, or a Tree Viper, Engle showcases the cost of the great canal not only in human lives but also in the lives of the jungle. It’s a world where the only happy ending can be a fantasy of escapism – but it’s a world that invites all ages to step in, to gaze with wonder, and to learn from history’s mistakes. 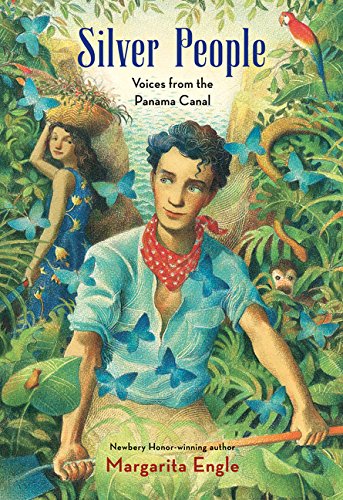