Prolific novelist Jason Born begins a new series with Hell Shall Stir, set during the nervous, dangerous opening stages of the clash between the forces of East and West, of savage medieval Christianity and the voracious conquering forces of the Muslim Caliphate under the rule of, among others, Caliph al Walid I.

Born concentrates his narrative on the figure of Duke Eudo of Aquitaine and his sons Hunoald and Remistanius, whom the Duke sends into neighboring Hispania in order to forge a vital alliance against the increasing aggression of the northern Franks. But the Visigoth warlords they encounter have problems of their own, from the depredations of Berber pirates to the incursions of a violent new faith called Islam.

Born is a practiced and skilled hand at crafting a fast-paced and dialogue-heavy, and Hell Shall Stir benefits enormously from his long experience – there’s not a dull scene in the whole book.

The printing of this edition is a bit sloppy at times – periods and closing quotation marks occasionally drift separate from the end of their sentences, single lines are orphaned alone on the final pages of chapters, etc. – but the drama and verve of the story itself provide ample compensation. 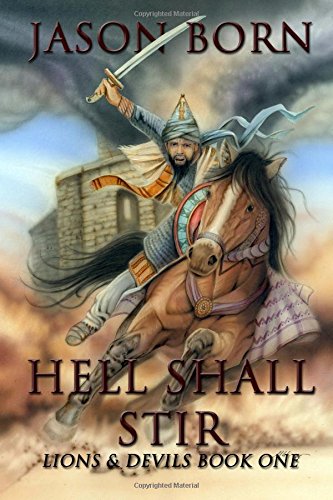