Written by Richard A. Knaak
Review by Thomas j. Howley

There’s a lot more going on in Prohibition-era Chicago than just gangsters and G-men. Private Detective/Ghost Buster, Nick Media, finds flashy criminals are the least of his problems. Nick has a sixteen-hundred-year past of dealing with otherworldly challenges under many names including a well-known canonized one. He also has his own “demons” to deal with, including an embedded dragon which has paradoxically saved his life on numerous occasions. He strives to protect his continuously reincarnated love interest, Claryce; prevent the arrival of hideous Wyld and other elves from the feirie world; combat his ancient enemy, Emperor Galerius; and solve paranormal puzzles to ultimately save the universe.

Black City Dragon is a quite intricate Mickey Spillane-type detective novel overlaid with super weird, full-spectrum fantasy. This is the third in a series, and it would definitely help to read the first two to fully grasp the comprehensive story context. Nevertheless, as I got further in, the characters, however odd, grew on me. As an Irish wolfhound owner, I especially liked the shapeshifting, wisecracking, werewolf-hound hybrid, “Fetch,” who is Nick’s sidekick and protector. “Non-stop action” is not an exaggeration in describing this novel.

My fantasy knowledge is via Tolkien, C.S. Lewis, and R.E. Howard, so this was a whole new and ultimately enjoyable experience. There are also elements of Lovecraft and R.L Stevenson sprinkled throughout. The writer is a best-selling author of many works in this genre. Modern fantasy readers will devour this book. 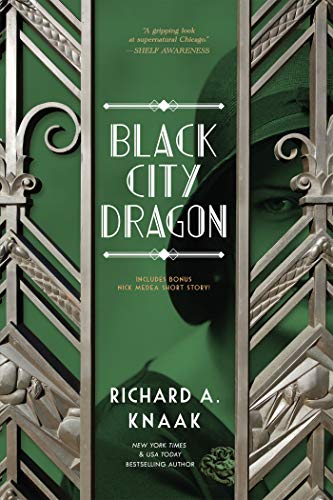