Workhouse Orphans, described as “an uplifting story of the struggles of two children left with nowhere else to go”, is not the sort of book I normally read. However, I was pleasantly surprised. Despite the title, May and Gus, two Victorian orphans, only remain in the workhouse for the first 50 pages, after which they are sent out to earn their living, Gus as a sailor and May as a housemaid. The shadow of the workhouse, however, continues to hang over May’s head in particular while she tries to make her way in the world.

On the whole, the book seems well-researched, and it is an easy introduction to the role of Liverpool in the slave trade, as well as to the use of raiding ships by the Confederates during the US Civil War. However, the research does not extend to the vocabulary used; it is particularly jarring when May excitedly thinks on how she now has a “boyfriend”, a word that would not be used in the romantic sense until 1905. In addition, characters sometimes act out of character for their times, none more so than Mr Freeman. The department store owner takes May, his maid, under his wing, delivers her ponderous speeches on the importance of charity, and eventually kisses her in a fatherly manner, and tells her that he wishes his daughter were more like her.

Workhouse Orphans is to be the first in a series of four books set around the Brownlow Hill Workhouse. The book is not a challenging read: the language is simple, the issues explained carefully, and there is no sense of any real danger to the characters. However, it is a gentle and enjoyable book that would appeal to lovers of sagas and rags-to-riches stories. 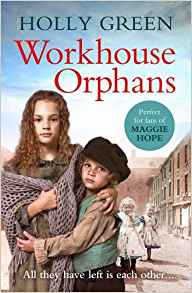