Villa of Delirium is a literary novel, originally published in French, that brings to life the hypnotic story of one family—the Reinachs—and the replica of a Greek palace they built along the Cote d’Azur in turn-of-the-century France: Villa Kerylos. While the protagonist, Achilles, is fictional, Theodore Reinach, his family, and their circle of friends are quite real. Goetz mesmerizes with finely drawn portraits of these prolific scholars who lived and breathed the rich and heady air of Belle Époque France. It was a world of erudition and classical knowledge that came crashing down in a 20th-century death spasm of war and genocide.

The story begins with an older Achilles visiting the ruins of his youthful idyll of 12 years, imagining it as it once was before Nazis looted, defaced, and destroyed much of its beauty (the Reinachs being Jewish). As he walks the empty palatial rooms of Villa Kerylos, Achilles recalls the past in poignant vignettes: the exacting classical Greek curriculum Theodore and his brothers task their young protégé with; the unbreakable cord of friendship he forms with Theodore’s nephew, Adolphe; and the depthless love he discovers with a married woman, Ariadne. Goetz takes the reader on a sun-drenched journey through the villa’s secrets and mysteries, past and present, in dazzling and seamless prose. As Achilles comes to grips with the contradictions of his youth and manhood—intellect and savagery, love and betrayal—Goetz achieves a modern-day Greek epic not easily forgotten.

Villa of Delirium is, quite simply, a fever dream of art, history, ideas, and love in all its varieties—a seductive symphony of the intellect and senses. Highly recommended. 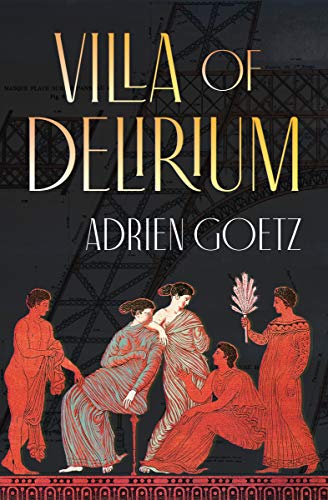