The Roman Quests: Death in the Arena

95 A.D. Ursula, Juba and Fronto, who fled Rome and arrest by the tyrannical Emperor Domitian and sought sanctuary in Britain, have been given a new quest. They must find Dr Jonathan ben Mordecai and, for that, they need to track down Lupus, a mute pantomime dancer who works for a travelling show—which includes gladiators. They will help behind scenes—at least that was the original plan…

Death in the Arena is mainly the ten-year-old Ursula’s story. She is a follower of the druidic path, and is especially good with animals, and the last thing she wants to be associated with is gladiatorial combats, men fighting wild animals and the execution of criminals. But, somehow, she must find a way to fit in with Lupus’s troupe and hide her true identity.

As always, in Caroline Lawrence’s stories, readers quickly become absorbed in exactly what goes on in a gladiatorial show and learn how the system works. Polyphemus, the animals’ caretaker, has tamed the bear so that it looks and sounds fierce but doesn’t actually harm its ‘prey’. The same goes for the gladiators. Gladiators are expensive to train so they learn how to make a fight look dangerous and exciting, spilling a lot of fake blood, but without injuring themselves mortally. Ursula becomes Polyphemus’s assistant.

We also learn about very early Christianity. The Roman Empire saw it as a threat to its authority and made practicing it illegal. Its adherents had to learn secret signs to identify each other. If caught, Christians had to renounce their faith and agree to worship Jupiter. If they refused, they were sent to the arena to be torn apart by wild animals.

This book is, perhaps, too touchy-feely for boys, but girls of ten plus who love magic and animals should enjoy it. 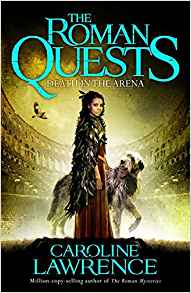