Grace Plantagenet is a bastard child of King Edward IV and, after his death, finds her way to the household of Edward’s wife, Elizabeth Woodville, to be incorporated into the family with all the good—and bad—that entails. How just plain Grace blossoms into the Lady Grace is a beautiful, often moving and extremely satisfying journey.

Rather than being treated as another royal by-blow, Grace is taken under her stepmother’s wing and is given the same benefits, advice and love that her other siblings receive. In return, Grace stands firm by Elizabeth Woodville until her end. She and her sisters, primarily Bess and Cecily, form a fast and unbreakable bond. But more even than her loyalty, Grace’s intuitiveness and “street smarts” stand her in remarkable stead, most especially with the overriding passion of her early life, John Plantagenet, Richard III’s bastard son by Kate Haute (see the author’s A Rose for a Crown) and, later, with the pretender, Perkin Warbeck.

This expansive novel is, after all, particularly about Perkin, the story of whom is brilliantly interwoven with Grace’s own. Indeed, Grace is both the eyes and ears of the Tudor court and that of the surviving Yorkists, who hope to overthrow Henry VII.

I have read—and reviewed—all of Easter Smith’s novels, of which this is third. Although I have enjoyed each offering immensely, this one is the richest, most engrossing tapestry of royal life. Easter Smith has the ability to grab you, sweep you along with the story and make you fall in love with the characters. She has managed to take one fleeting historical reference to a Grace Plantagenet and spin a glorious tale based upon fact and pure imagination.

You know you have loved a book when you’re sad it ends. I cannot recommend it enough—and it is absolutely a wonderful winter read! 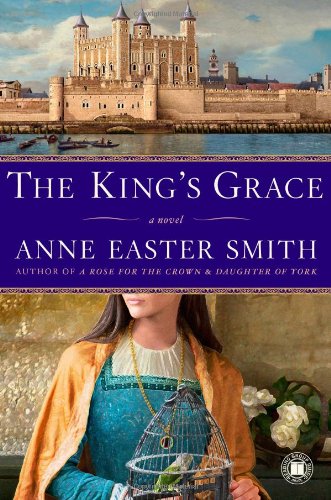