The greater New York City area has fallen victim to the Italian Black Hand. Well-to-do merchants, bankers, high-level public officials, even Wall Street tycoons must pay exorbitant sums or suffer the brutal consequences: kidnappings of children, bodies floating in the river, explosions in the night. In 1906, the City teems with immigrants. Gangsters can too-easily recruit helpers and hide from or bribe the local police.

Isaac Bell and his detective agency form a squad to put those behind the Black Hand mayhem out of business. They soon discover the enterprise extends far wider than first thought. A counterfeiting operation, sabotage of the state’s massive below-ground water aqueduct system under construction, and the rumored assassination of President Teddy Roosevelt are all in play.

Creative ploys, diversions and false threats by those on both sides of the chase enhance the never-dull story lines. The settings and details, from the vehicles and buildings to what people eat, are accurate. The Gangster becomes not just a page-turner but also a window into the lives of New Yorkers a century ago, from the upper crust down to bordello women, minimum-wage union workers, and street peddlers. The interactions with Teddy Roosevelt reveal the man as a fearless politician with a common man’s touch. Several full-page black and white illustrations spaced throughout the novel and a cast of characters at the front help make the story easy to follow.

Cussler fans and any reader looking for a fast-paced thriller with larger-than-life protagonists will enjoy this ninth adventure of detective Isaac Bell. 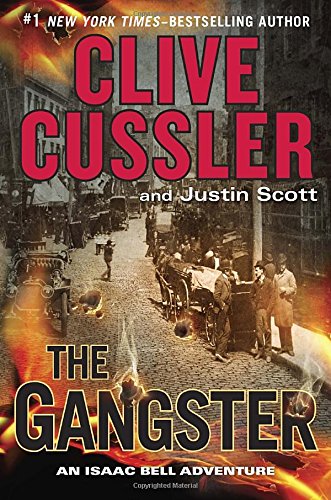