Born in 1926, Svetlana Stalina was raised in the Kremlin. When she was six, her mother committed suicide. Relatives were executed in the purges; a brother disappeared, another died a Nazi prisoner. When Svetlana was sixteen, Stalin sent her 38-year-old first love to the Gulag for ten years. Three marriages and several lovers later, Svetlana defected to the United States in 1967, leaving behind a 22-year-old son and a 17-year-old daughter. Unused to money – she never had a bank account – Svetlana distributed wealth gained from her memoir Twenty Letters to a Friend to good causes. She married an adherent to an experiment in communal living in the Arizona desert. The widow presiding over the community appropriated most of Svetlana’s remaining money. In 1984 Svetlana returned to Russia in an unsuccessful attempt to unite her Russian children with her American daughter. Back in the west, she moved several dozen times, falling out with friends, dying in poverty in 2011. She saw herself as a pawn. Rosemary Sullivan sees her as the Kremlin princess: demanding, naïve. This book is a masterful portrait of a damaged woman whom I would love to have met; reading it is the best alternative. 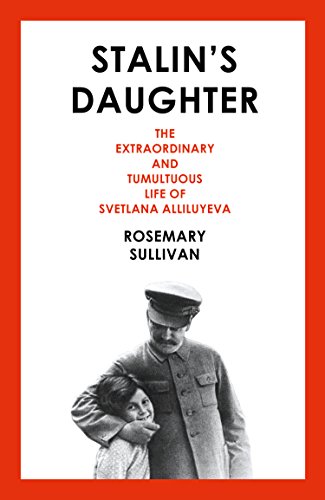