Renaissance Italy is a crazy-quilt of independent city-states; a hotbed of intrigue – and no family epitomizes the era more than the notorious Borgias. The mysterious Andrea Orsini is a secret agent for Cesare Borgia, the cunning and powerful son of the Borgia Pope, Alexander VI. The Borgia’s game plan is to consolidate all Italy under Borgia rule, and at first Andrea finds no fault with this program. But when his mission for Borgia entwines his fate with that of the beautiful Camilla, wife of the elderly Lord of Citta del Monte, Andrea finds it impossible to continue to serve the Borgia interests. It takes all of Andrea’s many talents to foil Cesare’s bid for power over Camilla and Citta del Monte, and to achieve an honorable life for himself.

Prince of Foxes was originally published in 1947 and was a huge best-seller; the movie version starred Tyrone Power as Andrea Orsini. A reprint from the glory days of the historical novel, Prince is richly plotted and written, with enough political intrigue, espionage, battles, duels, and high romance for half-a-dozen modern novels. Still an exciting and satisfying read; highly recommended. 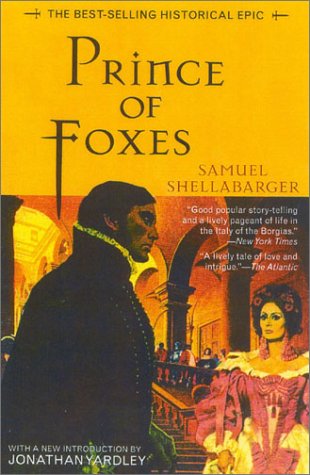