This multi-stranded novel is more contemporary than historical, but it has several back stories that begin with a young bride in 1891 France and then travel throughout the 20th century via various exotic locations in the Far East and Europe. It has a wide range of characters including dancers, circus performers, artists and fashion models.

Maggie works for a prestigious London auction house in 2015. When she discovers a discarded but exquisite piece of beadwork which can be worn either as a collar or a coronet, she is curious about its origins. It is not until she appears on a TV chat show and is contacted by a woman who knows something about it that Maggie undertakes some serious detective work into the object’s history. A former model who once wore it says she felt it was unlucky: “there was some bad juju attached to it… something about its energy… not entirely positive”.

This will appeal to anyone who loves lavish descriptions of fashion and design, or who is just intrigued by the personal stories behind vintage items, but it is hampered by its disjointed and ambitious scope. Maggie’s present-day relationships and working-mother-guilt issues tend to quash any real eerie sense of the object’s malevolence in its journey across time. (If readers feel confused at any stage, there is a useful chronology in the notes at the end.) In contrast to the excesses of the narrative, the cover image of the Australian edition is remarkably restrained and fails to reflect the fabulous nature of the collar/coronet with its fleur-de-lis pattern made of “glittering diamantes, delicate beading and slightly spiky sequins”. The underlying message here is: beware of what you wish for – it might be only bling. 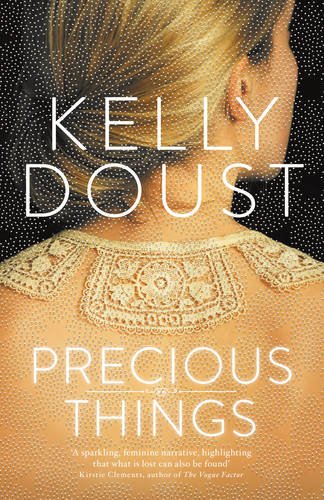