Set in Victorian Brighton, this novel centres around the contemporary obsession with spirit mediums, ghosts and séances. The main character is Mina Scarletti, an unusual investigator, not because she writes horror stories, but because she herself is short, child-like in appearance and twisted in body due to scoliosis. Mina’s mother has become involved with the group of believers run by Miss Eustace, a medium of unusual power who can channel the ghost of the deceased Mr Scarletti, even.

Mina is the sceptical one, and the novel follows her attempts to unmask and reveal the mendacious tricks of Miss Eustace and her accomplices. The tale is a leisurely one, very much in the style of a Victorian novel. The action often takes place internally as characters question their belief systems and ideas of faith, death and life after this perhaps not so final event. The author has already written the next Mina Scarletti mystery, The Royal Ghost, and in addition, has written a six-book series featuring another lady investigator, France Doughty, which I intend to try out. This novel is perfect for those who enjoy a Victorian atmosphere and do not demand high action throughout. It is thoughtful, well-characterised and thought-provoking. Ultimately mediums succeed in duping those who wish to be duped. 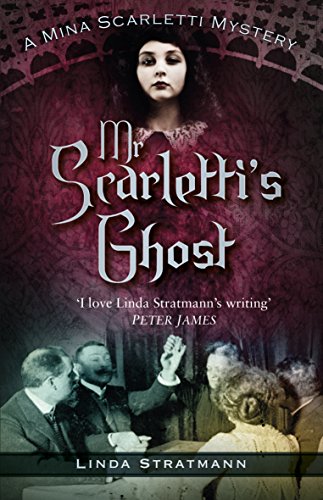