Grant and Sherman: The Friendship that Won the Civil War

Ulysses S. Grant and William T. Sherman are universally recognized as the most distinguished Union officers of the American Civil War, and certainly rank as two of the U.S. Army’s most significant warriors of all time. While the two men were strikingly dissimilar in personality, they shared the same stigma of pre-war failures. Sherman’s abrasive nature and lack of discretion saw him labeled as mentally unbalanced, while Grant’s pre-war drinking saw him depicted as both an alcoholic and a failure. War saved them both. Each began the conflict far from the public eye, and each learned from initial setbacks to become awesome strategists and tacticians. Both men valued and respected the other and formed a military and personal relationship that, though tested, survived military and political combat.

Flood is a talented popular historian who is well known to Civil War readers. His protagonists’ relationship is analyzed against the backdrop of a nation and an army torn apart by the worst conflict in American history. Grant and Sherman, their failures, their home lives, their politics, their successes are narrated by a writer comfortable with his field and capable of presenting two blemished individuals not just as specialists in war, but as flawed men who each triumph over adversity with the aid of the other. 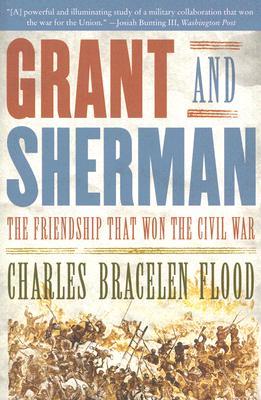