Bomber is the story of 17-year-old Harry Friedland, a ball turret gunner on a B-17 bomber, the so-called Flying Fortress. Starting powerfully with the crew witnessing a badly damaged bomber crash on their East Anglian airbase, the action never lets up. Despite the easy camaraderie among the different characters, the novel is pervaded by a sense of despair that they’ll not survive, combined with a fierce determination to fight the Nazis, come what may. Harry’s guilt that he survived polio as a child while his brother didn’t, a disease which struck at random, is a perfect analogy for the risks taken by the crew – will I die today or will it be the next man?

Effortlessly transported back to WW2, the reader gets a real insight into the lives of the American airmen, from the airbase ritual of gathering by the control tower to count how many planes return from a mission, to getting to know ‘the Limeys’ at a local fair. The issue of race is raised in the treatment of black GIs by some fellow Americans, and there’s even a gentle romance between Harry and local girl Tilly.

The action is seen mainly through Harry’s eyes but also briefly from the POV of a German fighter pilot and a woman in the French Resistance. Although fear affects the crew in different ways, with some becoming talkative while others are quiet, Harry’s particular fears are compounded by the fact that he’s Jewish.

The story is meticulously researched, even providing a cross-section of a B-17 at the back of the book, and is written in very accessible UK English but with spot-on American dialogue. Despite it being an easy read, the novel is shockingly brutal in places and best recommended for boys and girls aged 13+. 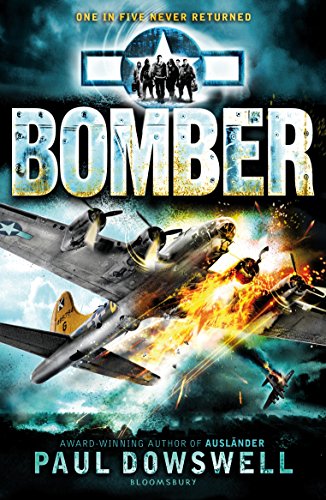