This is the fourth in the Kate Shackleton series – herein lies proof that the books do not need to be read in their order to be enjoyed (I have somehow missed out on Brody’s books until this one). Kate is a private investigator in Yorkshire, post-World War I. Her husband Gerald was declared missing in the war; Kate has the nebulous status of not being sure if she is a widow, and her profession arises as an attempt to find out his fate. Her latest case is a domestic inquiry. Mild-mannered Cyril Fitzpatrick is concerned about his wife Deirdre. He’s suspicious of her absences and the extra income she’s brought home. Kate’s investigation grows to include a murdered man, his mistress, and his scorned wife, and the discovery that Deirdre’s employment has been as the “woman unknown” in divorce proceedings.

Brody has created appealing characters in Kate and the other women in the story who chafe against the restrictions placed upon them. Promotional material makes a favorable comparison to Jacqueline Winspear’s Maisie Dobbs series, but Brody’s series should be evaluated on its own merits. It has its own place in the landscape of post-World War I mysteries, taking a different tack from Charles Todd’s and Winspear’s books. Now to find books one, two, and three! 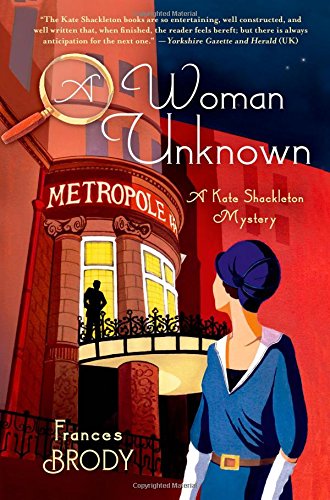