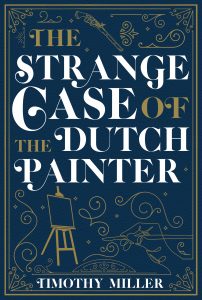 The fascination of Sherlock Holmes continues into the 21st century, in a range of media and creative output. The demand for historical novels set in the Holmesian world remains strong.

In the best examples, the overblown prose of the originals is whittled to its clever core of satisfying plots and ingenious resolutions. Timothy Miller’s second ‘Strange Case’ novel features a witty amalgamation of Sherlockian investigation with historical oddities. The Strange Case of the Dutch Painter (Seventh Street Books, February 2022) revolves around the suicide of Vincent Van Gogh, and throws up some intriguing perspectives on the era, the painter, and the power of art.

The Strange Case books intermingle fictional and historical personages from the late Victorian age. Miller mixes these characters effortlessly. “Most of the secondary characters, including the narrator and the ultimate villain of the piece, were real people,” he explains. Some of them “desperately clamoured for every fascinating detail of their stories to be told”, while there was little available information about others.

Miller respects the historical timeline of factual events. “Although I desperately wanted Gauguin to make his escape to Tahiti, for instance, that actually didn’t occur till three years later, which was way out of bounds,” Miller says. He prefers to treat history “like a frame around a picture—you can’t paint outside the lines. It’s like writing poetry in traditional forms.”

Traditional Victorian-era attitudes to women, mostly expressed in their absence from important roles in the plot, meant that Miller needed to dig a little deeper for his purposes. “What really helped was a book I stumbled across called The Deceivers, by Aviva Briefel.” Briefel’s work provided “a solid grounding in women’s roles in the art world at the time (both licit and illicit), as well as a sort of hierarchy of forgery. Great book!” he adds.

The Strange Case of the Dutch Painter takes place across various European countries as the protagonists chase down the forgers. To create these convincing locations, Miller used a combination of first-hand experience and research, added to a smart technique that’s quite possibly under-utilized by historical authors in general. “I cheated,” he says. “I looked at the PAINTINGS. I think you could probably map Auvers, and Arles, and every other location in the novel just by Van Gogh’s works.”

The novel offers as much about art history as it does about solving problems through inductive reasoning. Miller “grew up surrounded by modern art” through a family connection, and “ fell in love with Michelangelo at a young age”. His early interest, though, was not the genesis of this intriguing novel.

“To tell you the truth,” admits Miller, “I was in a card shop one day, and saw a card with one of Van Gogh’s self-portraits. What I knew about Van Gogh at the time was what everybody knows: genius painter who cut off his ear as a gift for his lady-love and then later shot himself. And I stared at the picture and thought, well if he really wanted to prove his love, a painter would cut his eye out for her. That one little discrepancy nagged at me, led to years of research, and finally this novel.”

About the contributor: Clare Rhoden is a writer and reviewer from Melbourne Australia. Her PhD investigated Australian literature of the Great War.