I must admit, from the beginning, that although I have Harper’s other Elizabeth I books sitting on my “To Be Read” shelves (or bookcases), I hadn’t gotten around to reading them yet. Still, I didn’t feel that reading this fifth installment first was uncomfortable or that I had missed a lot.

Elizabeth I is a young queen in the summer of 1564. The court has taken to the country because there is plague in London. Avoiding the plague doesn’t seem to avoid murder, however. In the gardens of Hampton Court, Elizabeth is attacked and almost murdered. As it turns out, she’s the only lucky one. Murder after murder, occurring in one court maze after another, remains unsolved. With her select band of advisors who are also her friends and confidantes, Elizabeth tries to formulate a plan to root out the murderer.

Elizabeth is a very human, accessible character. There is not much of a regal air about her and that, perhaps, has something to do with the fact that she is still a young queen. Elizabeth’s dependence upon William Cecil, and her utmost truth in him, is almost palpable. Her deep emotions about the growing dementia of her childhood nurse are painfully felt. Her relationships with Darnley and Dudley are complex, and there is always a sense that she is super-sensitized to the repercussions of each and every one of her actions. A light and worthwhile read. 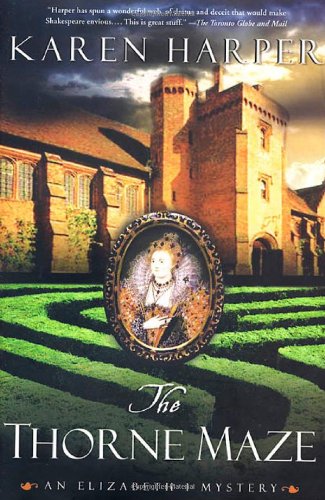