She Lover of Death: A Fandorin Mystery

Wishing to cast off her humble rural Siberian upbringing, Masha Mironova transforms herself into the daring Columbine, a young woman searching for love and adventure in 1900 Moscow. Led by a friend to a monthly gathering of the Lovers of Death, Columbine becomes enthralled with the idea of suicide and the privilege of being selected as the next to die by her own hand. She and other Lovers vie for the attention of group leader Doge, share poems celebrating Death, and watch for three telltale signs that their time has come.

She Lover of Death is the eighth in the Erast Fandorin mystery series. First appearing in 1998 in Russia (and 2003 in English translation), Fandorin books run the gamut of detective fiction–covering conspiracy, political, spy, thriller, Agatha Christie, hired killer, and other genres.

She Lover, classified as a decadent mystery because of its focus on the taboo and unsavory topic of suicide, navigates expertly between light and dark. Fandorin, called Stammerer or Genji in this book, is a keen observer and protector, wry and adventuresome tester of new technologies, and clever sleuth. Columbine is at one moment charmingly insouciant and at another touchingly vulnerable.

The story is told from several perspectives—Columbine’s diary, traditional third-party narrative, newspaper articles, and police reports—and maintains the unique voice of each storyteller. The plot segues from follow-the-clues to philosophical and psychological examinations of death and those who seek to end their own lives. It is continually surprising, thought-provoking, and thoroughly entertaining. This first read of a Fandorin mystery is, for this reader, a beguiling invitation to delve into others. 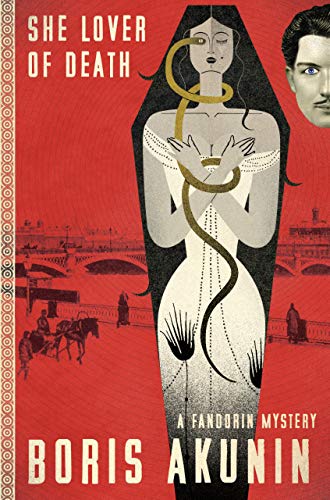