Jackie and Maria (US) / The Second Marriage (UK)

Jackie and Maria explores the eponymous two women and their connection through the millionaire philanderer, Aristotle Onassis. The narrative is divided into two parts: Jackie Kennedy and Maria Callas. Jackie, the wife of John F. Kennedy, will later marry Ari. Maria, a Greek American opera singer, was in a long-term relationship with Ari before he married Jackie. Jackie begins as the sophisticated and elegant wife of a politician. Thrust into the public eye, she suffers privately as her husband cheats on her and she loses babies. After JFK’s death, Jackie is swept up in Ari’s dogged pursuit of her. Meanwhile, Maria is a famous soprano trapped in a loveless marriage with her manager. Independent and self-sufficient, Maria leaves her husband and begins a relationship with Ari. Maria struggles with losing the potency of her voice and has to deal with Ari’s wandering eye.

Jackie and Maria is a fictional take on these two characters, based on research but also filling in the gaps. There is no evidence that the two women ever met, but Paul has them meet briefly a couple of times. While Aristotle connects these two women, Jackie and Maria are also linked by tragedies and challenges: losing children in infancy, substance abuse, trying to find real love, cheating spouses, and life with paparazzi exposing their lives in the tabloids. But they are also very different. Jackie puts all her value in making a good marriage, while Maria creates her own life and future with her singing career. Through it all, Maria always plays second fiddle to Jackie, and the title reflects this. This book is perfect for fans of Stephanie Thornton and Elise Hooper. 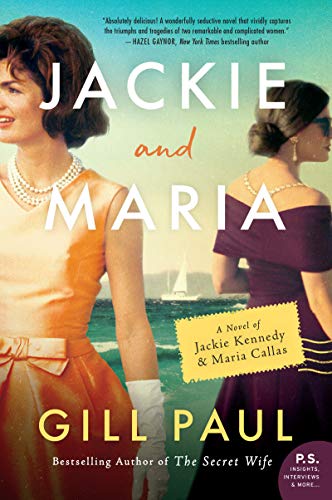