In Koen’s fourth fine novel (after Dark Angels, 2009), Louis XIV’s reign as French monarch is unique in unpredictable ways. He grows up during the Fronde, a series of violent uprisings. He inherits a government master-planned by powerful men (Richelieu, Mazarin), seemingly content to be a rubber stamp – until Mazarin dies in 1661.

The king, now 22, resides at Fontainebleau, a royal chalet surrounded by forest and, given modes of travel, remote from Paris. When he makes plans to deprive certain overambitious subjects of the means to undermine him, he consults his advisor, Colbert, but the king is making his own decisions now. Success builds on success. As the king’s reach and power grow, so does his self-confidence. So also, his attractiveness to women, including his brother’s wife.

Then the most desirable (married) man in Europe falls in love with a 16-year-old girl. Louise de la Vallière is, by court standards, beautiful and innocent when she becomes the king’s mistress. Koen treats their love story with respect and warns it will not last, but Louise remains at Louis’ side long enough to make her fascinating.

It’s risky to speak for a girl who lived in the 17th century – hopes and fears had a different shape then – and to pinpoint a change in a man’s self-image. It’s especially risky to fictionalize a well-documented life. Other than the appearance of the man in the iron mask, however, which is overused in fiction, there are few false notes in Before Versailles. Koen’s intimate portraits of the powerful young king and the lovely maid of honor, set amid the cruel elegance of a secluded court, are both touching and convincing. Before Versailles is highly recommended. 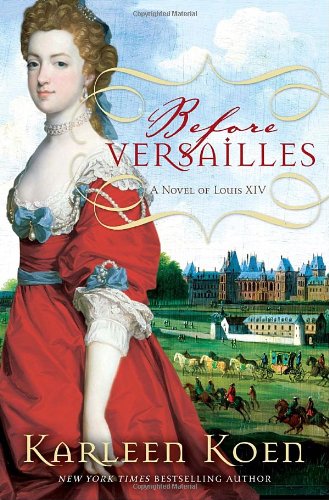