A Clash of Spheres

A Clash of Spheres, by P. F. Chisholm (aka Patricia Finney), is the latest in a series of mysteries featuring Sir Robert Carey and his sidekick, Henry Dodd, from whom he is currently estranged. In this tale, Carey is sent by his cousin, Queen Elizabeth I, to become Deputy Warden on the Borders at Carlisle. Trouble is brewing for the queen, coming especially from Spain, where the Catholic king dreams of taking England and returning her to the true faith. Sir Robert Cecil, Privy Councillor to the queen, warns that Spain may have intentions in Scotland, as well. Of course, this brings Sir Robert Carey squarely into the intrigue.

This is the first Sir Robert Carey book I’ve read, and perhaps that is a disadvantage. While scene by scene the book moves along, the relationships among the characters are difficult to grasp, as is the overall arc of the narrative. Perhaps starting at the beginning of this eight-book series is the key to appreciating the tale in full. 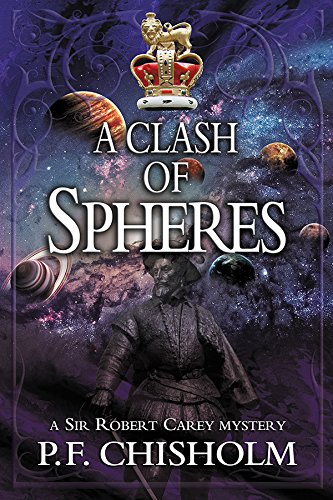