compiled and edited by Sarah Johnson 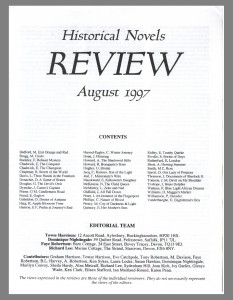 The inaugural issue of the Historical Novels Review

It seems fitting to compile our 15th anniversary feature just after our largest and most successful UK conference ever. (Hearty congratulations to Jenny Barden and her on-the-ground organizing team!) The Society has grown in leaps and bounds since Richard Lee had the brilliant idea to create it in 1997. My own entrée into the HNS began with one of Richard’s early publicity posts to an online forum… an international money order for membership was mailed out to Devon a day later.

Our revamped website (www.historicalnovelsociety.org), Facebook groups, awards, and local chapters have helped us increase our range and presence; today we number almost 1100 members worldwide. However, our enthusiasm for novels set in the past has remained unchanged since the early days. To illustrate this, we’ve invited a small number of our longtime members and staff – who hail from the US, UK, Canada, and Australia – to reflect on their experiences and what the HNS has meant to them.

Since magazine space is limited, I’d like to encourage everyone to contribute to the online version of this feature, which will become part of the website archive. How did you first hear about the Historical Novel Society, and what have you gained from membership? Please send your thoughts to me at sljohnson2@eiu.edu for inclusion.

Happy birthday, HNS, and thanks to all our members for helping make the Society the large, thriving, and prominent global organization that it is today.

LUCIENNE BOYCE, Author:
It wasn’t until recently that I realised I was one of the first UK members of the Historical Novel Society. Really, I had no idea I was so old. Not long after I joined I remember hearing Richard Lee describe historical fiction as “the genre that dare not speak its name” (a title since claimed by science fiction/fantasy and romance). Well, that’s not true now, and I like to think that our Society played its part in exploding the misconception that historical fiction is a poor cousin of “real” fiction and an illegitimate offspring of “proper” history. Through the Society, I’ve learned a lot, gained valuable experience and a few free books by writing articles and reviews, had the chance to interview some of my writing heroes, found some great books to read in the Historical Novels Review, and made some good friends. I hope the HNS and I trundle on together for another fifteen years!

PATRICIA BRACEWELL, Author:
I attended my first HNS conference in 2009, taking advantage of the Agent Pitch Sessions which resulted in two requests for my manuscript about an early medieval queen. Once that ordeal was behind me, I relaxed and focused on the many remarkable people, both published and yet-to-be, who crossed my path. I returned home with new insights, armloads of books, and the conviction that I had been warmly welcomed into a sympathetic community of writers. As it turned out, I had also found an agent who believed in my book. Would we have discovered each other if not for that conference? I think it unlikely, and I am grateful and honored to be part of an organization whose members so generously offer each other opportunity, support, and friendship. That manuscript I pitched in 2009 will soon be published as Shadow on the Crown – a Cinderella story for sure, with HNS playing fairy godmother!

LUCINDA BYATT, Reviewer and Features Co-ordinator, HNR:
Claire Morris was editor when I joined the Solander team in 2005, years when that magazine was in its heyday. Some of the most memorable interviews were those I did in person: chatting to Helen Dunmore in a noisy marquee at the Edinburgh Book Festival; interviewing Alison Weir while she was finishing breakfast (for the record, a full Scottish one!) in her hotel; or discussing research with Margaret Elphinstone at the National Library of Scotland. I also had the privilege of meeting Ismail Kadare after he won the first ever International Man Booker Prize. Following the merger of the two magazines, we’ve had a few publishing coups for Historical Novels Review, too: Hilary Mantel’s interview appeared just days after publication in May 2012 (although we had to sign a heavy-handed press embargo to achieve it). While the Society’s online presence is a massive new development, I hope the printed magazine will continue to interest and entertain members – I’ve certainly enjoyed my small part in it!

ANN CHAMBERLIN, Author, Reviewer, and Conference Organizer:
Frustrated for years by trying to fit in with other genre organizations when history was always my favorite for reading and writing, I found the Historical Novel Society through an internet search. I remember going down to the bank for an international money order to buy my membership when you couldn’t use dollars or credit cards.  Must have been about fifteen years ago. Happy Birthday!

I don’t have the personality or the cash for a lot of publicity, but I find I can do things like reviewing new titles (although I’m probably too fierce a critiquer) and working to make the North American conferences great – from the first one that was in Salt Lake because I volunteered to run it. We thought we’d be lucky to get thirty attendees for a start – we got ten times that. I could have been overwhelmed, but the support was wonderful.

ANDREA CONNELL, Managing Editor, HNR Indie Reviews:
I didn’t have a “label” for my favorite genre until I found the HNS in 2000. All I knew was I loved stories set in times past through which I could be learn and be entertained. Through membership, I found I wasn’t alone in my “obsession” and was ecstatic to have located an incredible resource that breathed life (and sank too many dollars!) into this fanatical “hobby” of mine. I volunteered in 2003, and never looked back – from reviewing to copyediting the print publications to becoming Indie Reviews Editor (in the days before the deluge of self-published books…). The HNS has given me the opportunity to learn a tremendous amount about the publishing industry, but the best part of being involved is helping to keep the genre alive, thriving, and in the forefront of the publishing industry’s view. Everything I do for the HNS is for that reason. Happy 15th anniversary, HNS!

SANDRA GULLAND, Author:
I have a complaint about The Historical Novels Review: it’s expensive. I virtually never read an issue without immediately buying several books. The reviews, I find, are exceptional – short and to-the-point – and I love the way they are organized by century. (I also love how I can now search out reviews on the new HNS website.) Through the Review, I’ve been introduced to many fine authors: Andrew Miller, Regina O’Melveny, Erin Morgenstern, Sheri Holman. The first review I read of The Sisters Brothers by Patrick deWitt was in the HNR, and I bought it immediately. In fact, I just came across the May 2001 issue of the Review with Year of Wonders by Geraldine Brooks highlighted – and “ordered” written beside it. The review, by Janet Mary Tomson, states: “This is a gem of a book.” No kidding!

DOUG KEMP, UK Reviews Editor:
I joined the HNS around 2000, though I have no clear recall of how I first found out about this splendid society. I started reviewing for the HNR in 2001 and then joined the UK Reviews Editor team in 2007. In addition to the immense benefits of being closely associated with a community of historical experts, enthusiasts and aficionados who have both satisfied and further stoked my interest in historical fiction, there have been many other highly positive aspects to my involvement with the HNS. Reviewing has allowed me to read and reflect upon a range of books and authors which otherwise I would most probably not have come across. As a Reviews Editor, it has been, let us say, instructive, as well as absorbing, to work with a range of publicity and press officers from the publishing industry – many of whom have been helpful and appreciative of what we are trying to achieve in the HNS, others rather to my occasional perplexity, perhaps less so!

ILYSA MAGNUS, US Reviews Editor:
Browsing around on eBay one day twelve years ago, I found a few books being offered for sale by a woman named Sarah. I bought a book or two – merely by chance – and we began to trade emails. At some point early on, Sarah asked me whether I’d like to become a reviewer for the Historical Novel Society. That reviewing gig soon evolved into an editorship. Over time, the number of books we review has increased exponentially. Since the HNS has become more visible, publicists seem increasingly more anxious to get us books to review – not quite like pulling teeth as it was back in the day.

I’ve been very fortunate to have had the opportunity to review some unbelievable novels I might not have picked up in the first instance. It has been a gift working with the editorial team on both sides of the Pond – all of whom are passionate about historical fiction and respect each other’s contributions. It’s also been a blessing to have had the opportunity to develop relationships with some amazingly talented authors. Where else would I, a matrimonial attorney in Manhattan, have had that chance?

JAMES VELLA-BARDON, Co-Founder, HNS Sydney Chapter:
I joined the HNS after I moved to Sydney in 2007 and discovered the Society on the internet. No similar society existed locally, and I wasn’t sure what to expect when I paid the membership online. But when I received my first copy of the Historical Novels Review I was completely blown away by the market news and interviews with authors which I think helped me to understand myself better. Its reviews also helped me to discover great works like Captain Alatriste, amongst others. Through the Society I’ve been able to identify and approach agents who have sold work that is similar to my current work in progress, and a few have generously provided some very useful feedback. This underlines how crucial the HNS is to aspiring authors, and last year I started an HNS Sydney chapter (http://hnssydney.blogspot.com.au) with the wonderful novelist Elisabeth Storrs which keeps growing in momentum.