The Haunted Imagination: John Harwood on the Victorian Gothic Novel 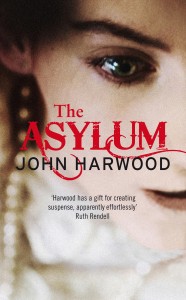 The Asylum by John Harwood

The popularity of the Gothic story in novels and films shows no sign of declining. With the global appeal of JK Rowling’s Harry Potter and the flood of spooky, vampire-laden fiction often aimed towards the young adult market, it is clear that there still is an immense readership for the style and tone of the Gothic. These hugely popular books tend to have dark subject matter, with underlying themes of anxiety and fear, as well as strong plots full of suspense and romance.

Much Gothic fiction has been and continues to be set in the past. Gothic romances were very popular in the 1970s. Often set in Cornwall, the cover revealed a windswept woman, in a shimmering silken dress, standing in front of a brooding castle or crumbling gothic pile. The heroine, one felt, very possibly wished she had put on something a little more sensible before venturing outside in the cold. Inside the castle, an evil uncle/father/husband would usually be found, plotting filthy acts of treachery, and a stunningly handsome rescuer would then appear to save the beauty from her distress. Writers such as Victoria Holt (one of Eleanor Hibbert’s pen-names – Jean Plaidy and Philippa Carr being others) and Phyllis A. Whitney produced these books by the barrow-load. Whilst the Gothic romance still retains its popularity, recent years have seen a flowering of what can be considered historical Victorian Gothic fiction – with narratives in varying nineteenth-century styles and plots verging towards the sensationalist melodramas of Mrs Wood.

In 2004 John Harwood set the ball rolling with The Ghost Writer (Jonathan Cape), a Victorian-style spooky tale in which a young boy discovers that his great-grandmother wrote a number of disturbing ghost stories. Incorporated into the text of the novel, these stories represented a fine pastiche of the Victorian narrative style. Michael Cox’s first novel, The Meaning of Night, was published in 2006 (John Murray). Set in 1854, it was described in its HNR review as “a darkly atmospheric and very gothic tale of wrath, nemesis, and self-destruction: a 600-page journey through the claustrophobic confines of a raving man’s mind.” John Harwood further encapsulated this recent trend in 2008 with The Séance (Jonathan Cape), a creepy, grief-laden novel set in 1881, in which Constance Langton inherits the haunted Wraxford Hall. The trend has, if anything, accelerated in 2013 with a third Harwood novel, The Asylum (Random House), a cunningly plotted tale of deception and betrayal, as well as through books by John Boyne, Charles Palliser and Diane Setterfield. John Boyne’s This House is Haunted (Transworld Publishers) is set in Norfolk in 1867 and owes much in mood and plot to Henry James’s Turn of the Screw, with a naïve governess entering a supernatural maelstrom to look after two orphaned and disturbed children. Charles Palliser’s Rustication (W.W. Norton), set in 1863, concerns a disturbed young man who has been sent down from Cambridge for a variety of misdemeanours and takes up habitation in a creepy old mansion inhabited by his impoverished mother and weird sister. Diane Setterfield’s Bellman & Black (Orion) is about a man’s rather macabre bargain, made following something inadvisable he did in his childhood.

When I interviewed John Harwood, I began by asking him for some background to this flowering of the historical Gothic amongst fiction writers, and what, for him, was the appeal of this genre set in nineteenth-century England. He says:

“I discovered Victorian Gothic fiction when I was eight or nine, through the Sherlock Holmes stories. It was the atmosphere I loved most: the fogs and alleyways and hansom cabs, the dark and stormy nights with wind rattling the casements in Baker Street. And Hobart, where I grew up, was more like Victorian England than mainland Australia, especially the old town, with its crumbling stone buildings: we had snow and frost and fogs, and there were still a few horse-drawn vehicles on the streets. My favourite Holmes stories were the quasi-supernatural ones like ‘The Speckled Band’ – a Gothic masterpiece – which led me to M.R. James and his contemporaries, and an enduring love of the ghost story.  Though I’m often classified as a horror writer, it’s the restraint of the classic ghost story that attracts me: the slow, atmospheric build-up, the brief, terrifying glimpses, leaving as much as possible to the reader’s imagination.

Speaking as a novelist, I’m drawn to late Victorian England because it’s such a rich canvas to work on. Parts of it are strikingly familiar: the bustling streets of London, the trains and telegrams, the industrial landscapes. But in an isolated country house you’re in a world that hasn’t changed much since the 1750s. The technology that cocoons us now – cell phones, cars, electric lights – doesn’t exist: once inside that crumbling mansion, you’re utterly alone with whatever may be lurking there. It’s a more elaborate, slower-paced society, and there’s a fascination in exploring how characters – especially women – deal with its constraints.

The language, too, is in many ways subtler, richer and more nuanced, especially for rendering shades of feeling, than contemporary speech. The version I’ve evolved is plainer and sparer than the stereotypical Victorian idiom, which we tend to think of as pompous, ponderous and over-ornate. But many Victorian writers were as eager to mock the stereotype as we are. Whenever I re-read the omniscient chapters of Bleak House, I’m struck by how ‘modern’ they sound, and they were written in the early 1850s, thirty years before the time at which The Asylum is set.”

When asked about his favourite Gothic fiction authors, Harwood expounds, “Apart from those I’ve mentioned, I’m often drawn to particular works rather than the complete oeuvre: the Gothic strand in Dickens, especially Bleak House and Great Expectations; Wilkie Collins’s The Moonstone and of course The Woman in White; Walter de la Mare’s ‘All Hallows’ – about a haunted cathedral in Wales – is a masterpiece. And of course The Turn of the Screw – in my judgement the finest ghost story – if it is a ghost story – ever written. In contemporary Gothic, the author I most admire is Sarah Waters: she writes beautifully, and her plot reversals are stunning. It’s difficult to sustain the conventions of the ghost story over a full-length novel, but she does it superbly in The Little Stranger [Virago Press, 2009] – a triumph of unreliable narration.”

I asked Harwood what draws contemporary novelists to the Victorian Gothic, and what it says about our society today. He says, “For the novelist, it allows you to do things that just wouldn’t seem plausible in a contemporary setting. Also it was – like ours – a time of very rapid change and intellectual unease (which I think helps to account for the popularity of Gothic fiction, then and now). Someone born in 1820 grew up in a world in which no one had travelled faster than a horse could gallop; if they lived until 1900 they’d have witnessed the invention of the railways, the motor car, the airship, x-rays, electric light, the telephone, the camera, the phonograph… along with a radical transformation of the collective worldview. To be born into a world in which the literal truth of Genesis could be taken more or less for granted, and to see those certainties shaken by fossil geology, evolutionary theory, the new Biblical scholarship, and so forth: that’s a more dramatic transformation than anything I’ve witnessed in my lifetime. All of which resonates powerfully with our own sense of facing a dangerous and uncertain future.”

Harwood’s novels feature a chillingly effective atmosphere, and when asked how he crafts it, he explains: “I spend a lot of time designing and developing my settings, especially the houses, because if I can’t walk around them in my head, my readers certainly won’t be able to. Wraxford Hall, in The Séance, grew out of a painting by George Goodwin Kilburne, but by the time I’d finished it looked nothing like the elegant original! For The Asylum, I built Tregannon House from the ground up, tuning the architecture and the landscape around it to the demands of the plot. I draw up detailed floor plans as the action unfolds, until I reach a point where the house seems to materialise above the jumble of papers and sketches on my desk, and feels like somewhere I’m remembering, rather than something I’ve invented. After that I concentrate on the atmospherics: where the light’s coming from, how a room feels and smells and sounds from my character’s point of view.

And of course, a decaying, isolated mansion, where you’ve only candles for lighting, is the archetypal Gothic setting, perfect for exploring the borderlands of perception – delusion, hallucination, visitation, and dream in all its varieties.”

The Asylum and The Séance both have an intricate and well-executed plot. Given that Gothic fiction tends to be focussed upon the solution of a semi-supernatural mystery, I asked Harwood if he prepared the watertight plot in advance or if it developed along with the tale.

“I tend to begin with a strong visual image: a brief, dream-like scene that replays in my head until I realise it’s determined to tell me something. For The Séance it was a crumbling Tudor mansion, festooned with lightning rods; for The Asylum it was the image of a young woman discovering her own tombstone.

Once I’ve begun writing I do a lot of planning in stages along the way, but, within the broad outlines of the mystery plot, a good deal of that gets modified or discarded as the story unfolds. I like to keep the ending as open as possible until I’m actually writing the climactic scenes; if I don’t know exactly how all this is going to resolve, it adds to the suspense.”

The Séance and The Asylum have strong and likeable female characters that attract the reader to their side. When I asked Harwood if he’d given any thought to having an unreliable and/or untrustworthy narrator as the main character, he hinted at what’s to come: “Indeed I have; I may well do so in my next book.

John Harwood lives in South Australia where he was head of the School of English and Drama at Flinders University, Adelaide, before writing his award-winning novels. His latest novel, The Asylum, is published by the Random House Group and HMH (2013).

About the contributor: DOUG KEMP is a member of the UK team of editors for HNR.