This inspirational novel is volume 3 in the Bells of Lowell series. Girls working the textile mills of 1833 Lowell, Massachusetts, threaten a turnout if the management proceeds with a 25% wage cut. Mill girl Daughtie Winfield faces animosity from the other girls when she doesn’t support the strike, and the scorn of the whole town when she befriends a young Irishman. Matters become more complicated when she begins helping Liam pass runaway slaves through the Underground Railroad.
The era is an exciting and underexposed period of American history, and I liked learning more about it. The New England abolitionist movement and the nearly universal disdain towards Irish immigrants are nicely woven into the action. However, the book suffers from the kind of pseudo-historical dialogue that can give historical fiction a bad name: “I’ll need to pen a missive” and “He was the instigator who stayed behind the scenes, ordering his henchmen to conduct the reprehensible deeds.” Readers beginning the series with this book will feel as though they have missed something, because several of the characters’ motivations seem to have been left behind in previous volumes. 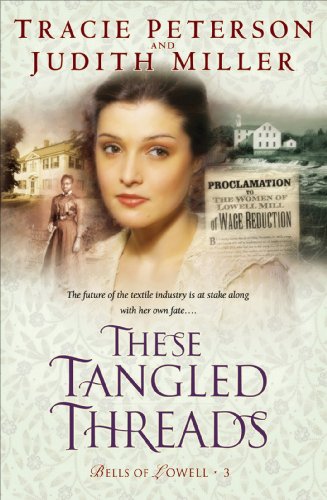