In 1914, in spite of impending war, King George V gives the go-ahead for Irishman Sir Ernest Shackleton, expedition commander on the ship Endurance, to sail for Antarctica. His mission: to be first to cross the icy continent on foot. Shackleton, a polar veteran, handpicks a crew of 27 men but, when Endurance reaches the open sea, he has 28 men on board, including a 17-year-old stowaway hidden in a locker.

Merce Blacksboro, who is loosely based on the real stowaway, is conveniently placed to tell the story when, after a shorter-than-expected summer, Endurance is trapped and destroyed by pack ice. Merce is determined, observant, and a good judge of character who recognizes Shackleton’s ability to manage a crises. In spite of his youth, Merce keeps his head like most of the crew when the ship sinks, leaving them stranded on ice. Merce is also along when Shackleton treks the rugged frozen terrain to the nearest whaling station and returns for the men left behind – 635 days after Endurance sailed. Shackleton’s first question upon reaching land in 1916 is particularly poignant: “Tell me, when was the war over?” only to hear, “The war is not over… the world is mad.”

Although Shackleton did not accomplish his original mission, he is justly famous for one of the most remarkable rescues in history. Interested readers may find his own account of the voyage, The Story of Shackleton’s Expedition, 1914-1917, available free online. Even those not normally drawn to adventure novels will find the depth of characterization in Bonné’s thrilling novel absorbing. The Ice-Cold Heaven is a richly imagined voyage based real events and, as such, is highly recommended. 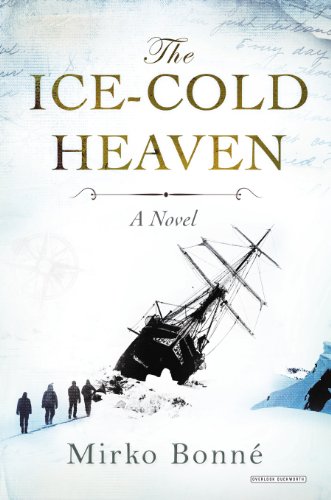