Veteran historical novelist Thom (Sign Talker, Follow the River) leads readers through the conflicted mid- 19th century war with Mexico, as seen through the first person viewpoints of Paddy, an impoverished young camp boy for the American army, and a young Mexican cadet, Augustin. Both have ties to John Riley, an Irishman who deserted from the American side before war was officially declared and led a famous artillery unit for Mexico, the San Patricios.

Befriended despite his status, young Paddy is more than once tempted to follow the charismatic Riley to the other side, where, drawn by their Catholic bond, the abused Irish- and German-born soldiers are treated as heroes. Once engaged by Mexico, Riley rises in the ranks, participates in the war’s major campaigns, and falls in love with the widowed mother of young Augustin. Still, he, his men, and the two young men for whom he becomes a hero pay a terrible price.

Although the character of the real-life Riley remains elusive, the two young narrators are vivid and unforgettable, and the war narrative fast-paced. Illuminating and compelling, Saint Patrick’s Battalion presents a stirring and provocative look at American Manifest Destiny, and is full of questions to ponder about both past and present. Highly recommended. 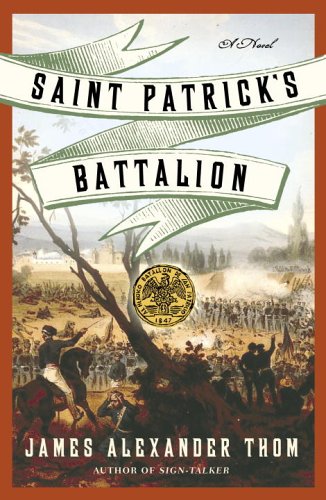