Dark of the Moon

In Dark of the Moon, Barrett presents the “true” story of the Minotaur, told in alternating first person by Ariadne and Theseus. Many years ago, a son of the Minos of Krete was murdered in Athens, and as a result, the King of Athens must now send one of his own sons to Krete to be given to the Minotaur. In Troizena, Theseus has grown up not knowing his full parentage. At the age of fifteen he discovers that he is the king’s son. He leaves his mother and stepfather to meet his father, who immediately sends him to Krete. En route, Theseus discovers why he has being sent there and agrees to a plan concocted by a woman he hardly knows.

Before we learn all this, we meet the teenage Goddess-Who-Will-Be, Ariadne, and her half-wit brother, Minos-Who-Will-Be. He is kept in the palace basement for his and others’ protection, and she is subjected to hours of lessons. As the next Goddess and ruler of Krete, Ariadne has much to learn. Barrett’s rendering of the goddess rituals are detailed and fascinating. Ariadne’s position isolates her, and she responds by craving intimacy. When a ship arrives from a foreign land, she meets some of its passengers who, unfamiliar with Kreten culture, do not fear and avoid her. Feeling freed by their behavior, Ariadne strikes up an inappropriate friendship.

Ariadne and Theseus are appealing teenage protagonists, and they narrate with honesty and emotion. Dark of the Moon is a fabulously-conceived reinvention of the story of Theseus and the Minotaur. Highly recommended. 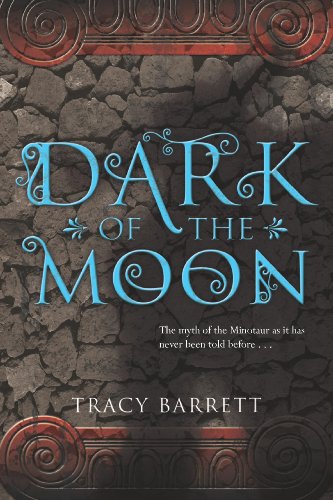