Stunts, Horses, Cowboys: Molly Gloss on the Dark Underbelly of the Cowboy Myth 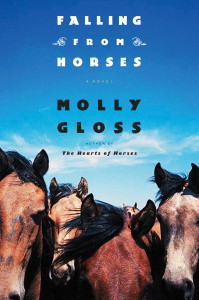 When I reviewed Falling from Horses (HNR, November 2014), I became a Molly Gloss fan. She tells the story of Bud Frazer, an Oregonian who becomes a Hollywood stunt rider in the 1930s. Bud’s story doesn’t begin or end in Hollywood, however, as Gloss narrates his life in Oregon and post-Hollywood fame as well. I asked her what attracted her to Hollywood after setting previous books in Oregon: “For years now I’ve been drilling down into the western mythology that shapes American culture, a mythology that ultimately owes its shape — its tropes and icons and heroes — to the movies that flourished in the 1930s and 1940s. So it was perhaps inevitable that my work would eventually take me to Hollywood in the heyday of cowboy films.” Already aware of the gap between real ranch life and its portrayal in the movies, Bud discovers the underbelly of the movie world, including much brutality behind the scenes. Gloss explained how she researched and approached the treatment of riders and horses. “I had read the famous stunt rider Yakima Canutt’s autobiography years ago, so I knew quite a bit about the abuse of horses in the cowboy movies before I undertook the novel. And more came out in my research — exposing that dark side of the cowboy films was a necessary element of the book. Hard to write, as well as hard to read.” Other resources Gloss used included The Hollywood Posse by Diana Serra Carey. “Carey is the daughter of a cowboy stuntman, and her book is a history of all those anonymous riders who made up the posses and the outlaw gangs in the oaters of the 1930s. Sorry to say, she tells several stories of terrible injury, and callousness toward the lowly stunt riders.” Other research involved a trip to the Margaret Herrick Library in Los Angeles (an archive of the Academy of Motion Picture Arts and Sciences) to look at stills of moviemaking behind the scenes to imagine what Bud was seeing on set.

Through Bud’s narration of his past, we learn that he’s become an artist and an important one at that. It’s an interesting juxtaposition with his early years as a stunt rider, so I asked Gloss how she decided that Bud would be an artist. “Very early in the writing, a line came to me in Bud’s voice, something he would say as he introduces his memoir: ‘This won’t be the whole story of my life, someone else will have to tackle that after I’m dead.’ I took this to mean that in his later life he was important enough to warrant a biography! So I toyed with a few possibilities, including the possibility that he might become a western writer along the lines of A.B. Guthrie, Jr. But I happened to see a painting of Thomas Hart Benton’s titled ‘Hollywood’ that seemed to be saying something about the seamy side of the movie machine…and after that I always knew that Bud’s fame would come as a painter whose work looks at the intersection of the real and the imagined West.” Bud’s friend Lily Shaw is equally engrossing, starting as a script reader and becoming famous as a screenwriter. When asked if she would write more about Lily, Gloss admits, “when I tried writing in Lily’s own voice, she tried to take over the novel! I wanted to stay focused on the cowboy movies, and Lily was always trying to take me into the wider world of Hollywood — a different novel from the one I wanted to write.” For more on women screenwriters, Gloss recommends Lizzie Francke’s Script Girls

What drew Gloss to historical fiction? “With a lifelong interest and enthusiasm for the literature of the American West, I’ve spent my writing life digging out the untold stories, turning them over, looking at them in different ways, scratching at the dark underbelly of the cowboy myth. I don’t think there was ever a time when I was tempted to write a contemporary novel.”

Falling from Horses is published by Houghton Mifflin Harcourt (2014). Discover more at mollygloss.com.

About the contributor: Ellen Keith has been reviewing for HNR since 2000. She has a lifelong interest in historical fiction, as evidenced by her undergraduate degree in Victorian Studies and her current position as Director of Research and Access at the Chicago History Museum.