The Secrets of Time and Fate

In present-day London, Jackdaw Hammond’s medical records after her attempted suicide indicate multiple organ failure, a diagnosis inconsistent with her jumping into the Thames—or leaving the hospital under her own power. But Jack has lived most of her life on the brink of death, having been saved by magic right at the moment she broke her neck in a childhood accident. More recently, she has been blacking out, and waking up to evidence that she might be committing horrific crimes.

A second story line follows 16th-century occultists Edward Kelley and John Dee as they travel from Prague to Venice and Alexandria searching for a way to end the demonic possession of Elizabeth Báthory, an actual historical serial killer. While these episodes have a more straightforward plot line, it’s a bit confusing as to whether Báthory has sent them to find a cure or is threatened by their cure, as she menaces Kelley’s stepdaughter in yet another time line, which is relayed through journal entries.

As Jack’s friends, including a witch, an anthropologist, her foster sister, and a former nun, along with a team of exorcists from the Vatican, race to save her and rid the world of a fallen angel, a volume of poetry encoded by Kelley’s stepdaughter shows up, leading to a final confrontation.

The story is a page-turner in many ways, though it treats demons, exorcists, revenants, and witches in a rather matter-of-fact manner. There’s a lot to keep straight, from characters and backstory to the mechanics of magic, and at times the relationships and connections feel a little thin. This is the third book in a series, so readers may be on firmer ground if they start with the first novel. 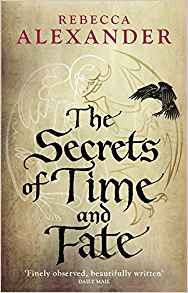