A Sinister Service (A Lady and Lady’s Maid Mystery)

The sixth installment of the Lady and Lady’s Maid cozy mysteries takes us to rural Staffordshire, where the smoke clouds from the porcelain factories’ kilns mar the beauty of the landscape. In November 1920, the three Renshaw sisters and their young brother visit Crown Lily to choose a pattern for a new china service for their grandparents. As they meet with the head designer and the factory owner, a prickly pall of tension is apparent, which Lady Phoebe Renshaw can’t quite put her finger on. When that same designer, Ronald Mercer, is found in one of the grinding machines, having suffered a gruesome death (which would have been more so had the huge blades not jammed), the police suspect the disgruntled son, Trent Mercer, who has been pulled unwillingly from his Eton education to follow in his father’s footsteps at Crown Lily. As the body count grows, Phoebe and her maid, Eva Huntford, investigate the suspects who all hold superior positions at the china factory, putting themselves at no small risk.

Maxwell’s cozy mystery takes place in what is now Stoke-on-Trent, the centre of England’s porcelain production. The intensely competitive nature of the business, post-war, features strongly in her plot. Phoebe is clever and innovative in her questioning of suspects, trying to catch them unguarded and draw them into traps of their own making. Here the four Renshaw siblings are together, and there is some interesting insight into their relationship with each other. For those new to the series, Phoebe’s friendship with her long-time maid, Eva, is quite different from what one would expect, but the end of the Great War brought forth rapidly changing times. This is an excellent standalone despite being part of an ongoing series, with lots to be learned about the bone-china industry, and a murderer who remains elusive until the final pages. 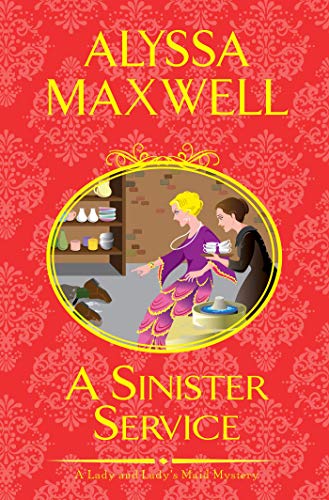