A Ride into Morning: The Story of Tempe Wick

Written by Ann Rinaldi
Review by B. J. Sedlock

Rinaldi bases her story on the Morristown, New Jersey, legend of Tempe Wick. In the bitter winter of 1780-81, the Pennsylvania Line of the Continental Army is encamped on her family’s land. While the soldiers respect their commander, General Anthony Wayne, they have been severely deprived of food, clothing, adequate shelter, and haven’t been paid for a year. Soldiers planning mutiny request the use of Tempe’s horse, in order to give their leaders more status and credibility. Will she aid the mutineers, or side with the officers?

The book is narrated by Tempe’s 14-year-old cousin Mary, in an attempt to make the story more relevant to young adult readers. I thought that that choice lost the tale more than it gained, because it results in additional distance between the reader and Tempe. I also found some parts of the story slow-moving, and it was longer than it had to be. However, as supplementary reading to school textbooks on the Revolution, it has value, breathing life into historical characters. Rinaldi did extensive historical research, providing an afterword detailing her methods, information on the characters’ fates after the story ends, and a bibliography. Ages 10-14 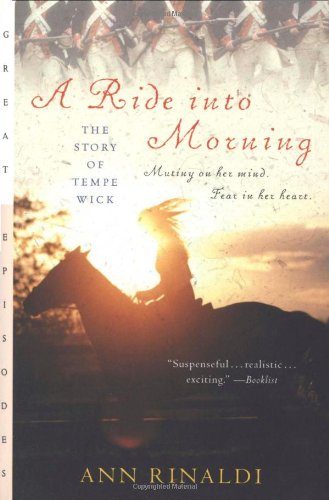