In Beekeeper’s Apprentice, the first book in this series, a short paragraph covers the Palestine interlude with a promise from the author to further expand on this adventure. This time Mary Russell and Sherlock Holmes disguise themselves as Arabs, Mary playing the part of an Arab boy. The time is 1919, the end of the first World War, and the Middle East is in chaos. Holmes and Russell are on the trail of a particularly vicious killer who will stop at nothing to see the British peace plan fail. Their journey takes them ultimately to Jerusalem but not without perilous adventures along the way.

Laurie King has painted a lush portrait of this troubled area and its historical background at the end of the war. Her attention to detail is meticulous. Whether she has her characters dining with Bedouins, having tea with General Allenby or floating in the Dead Sea, the reader is right there. The sense of place is so real, the reader can feel the sting of the sandstorm, feel the sun’s scorching rays, shiver in the chill of the desert night and thrill to the sight of the golden city of Jerusalem. As a mystery and as part of the Holmes/Russell series, it might leave something to be desired, but as a historical novel it truly shines. 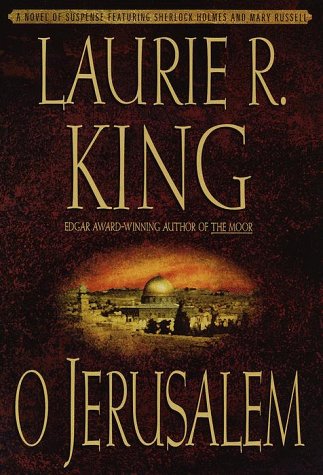