Set on the home front of New York City during World War II, Belfer’s second novel (after the acclaimed City of Light) follows the development of penicillin to be used in the war effort. Though it’s told from many viewpoints, we mostly follow photographer for Life magazine Claire Shipley. Her journey begins at the bedside of a hopeless patient at the Rockefeller Institute who has a miraculous recovery followed by a swift and agonizing death once the antibiotic runs out. Without a happy outcome, her boss kills the story, but Claire is soon embroiled in intrigue, murder, betrayal and espionage surrounding its continuing development. She also finds love with James Stanton, a physician developing the wonder drug; danger to herself and her young son; and the possibility of family and legacy via an estranged and ruthless father who wants to profit from the research.

This fulsome tale of a modern marvel, and what life was like before it became ubiquitous, crackles with twists and turns, including the paths of Detective Kreindler, as he infiltrates the fifth column, and Dr. Stanton, who finds links to Claire’s father that lead to murder. Once again we’re reminded that no great fortune was made without government assistance at its beginnings. The novel is inhabited by the radiance of lost souls, too: from Claire’s daughter, whose death haunts her, to the patients who succumb, to wartime casualties, to haunting memories of parents lost in the flu pandemic that followed the last war. It’s also a beautiful valentine to 1940s New York City and its neighborhoods, painted with great affection. Although a more careful edit would have made a tighter reading experience, A Fierce Radiance’s life, humanity, and crack mystery was worth the wait. Highly recommended. 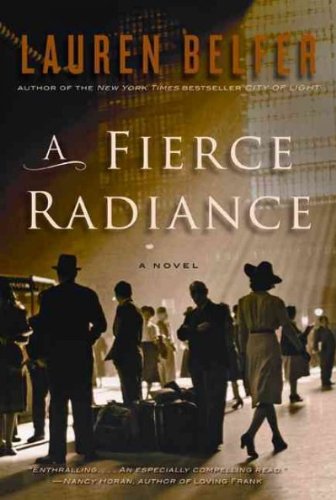