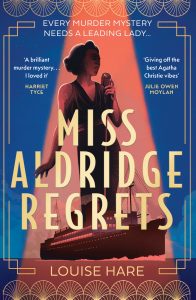 The Lovely City (HarperCollins, 2020), Louise Hare’s debut novel, was greeted with an avalanche of praise.  Not only was it a BBC2 “Between the Covers” pick, but it was also praised in newspapers, including the Observer and The Mail on Sunday, and in magazines such as Elle. Her novel was also shortlisted for the RDL Ondaatje prize. Her second novel Miss Aldridge Regrets (HarperCollins UK/Berkley, 2022) is already receiving glowing reviews.

Hare, originally from Warrington, now lives in London, having completed her MA in Creative Writing at Birkbeck, University of London. Place is clearly an important ingredient for her in creating a sense of time and atmosphere. When asked what is most important for her, the characters, the setting or the socio-political background of the period she is writing about, Hare explains that she usually starts off “with the main character and an idea of the story I want to tell,” she says.  “For example, Miss Aldridge Regrets began as a short story set in a jazz club in 1949. Once I knew I wanted to explore the story more, I thought about the setting. Because the Queen Mary was such an icon of her time, and because the late ´30s was such an interesting period in history, I decided to move Lena’s story to that setting. I felt that those elements could enhance Lena’s personal history and would help me to explore the issues she has with race and class onboard the ship.”

Setting for Hare is a key element in her novels, with Soho, an area in London, featuring strongly. Even today Soho, with its intriguing history, has a lively and vibrant air surrounding it. For Hare, writing about the 1930s and 1950s, “Soho is fascinating because it attracted people from all over. From the Huguenots, to Italians, to Black jazz musicians. It’s an area that has often had a bad reputation but has also been loved by so many.”

In complete contrast to the seamier side of Soho, which in the past was home to strip clubs, “walk up” brothels and gangsters, and still is the home of Berwick Street market, one of London’s oldest markets, Hare has set much of the action for her latest novel on the Queen Mary. This was a conscious decision, and not just because of the journey and the fact that, for the length of its voyage, all the passengers on a Cunard White Star’s two-ship weekly express service could not leave the liner.

Those passengers occupying the 711 first-class cabins naturally had a very different experience from those travelling in the cabin class and tourist class. Lena Aldridge joins the ship when a stranger offers her the chance to star on Broadway and a first-class ticket to New York. The timing couldn’t have been better for her, as she is looking for a chance to forget the married lover who has just left her and for the opportunity to pursue her dream of a brilliant career in the theatre.

For Hare, one of the reasons that she chose this setting was because she loves “the glamour of that period of travel,” she relates. “Often, on a weekend, I sit and watch an old episode of Poirot on TV (David Suchet is my favourite and I’ve seen every single one multiple times!). Also, I used to work in the travel industry and was lucky enough to stay in some famous hotels as part of my job – Raffles in Singapore, The Savoy in London, The Plaza in New York. I used to love going down to the bar and ordering one cocktail (all I could usually afford!).”

In Miss Aldridge Regrets, Hare wants to show Lena’s dilemma, and Soho made the ideal place as a starting point for the story because Lena is a mixed-race girl passing for white, “but has never had to hide her heritage in Soho because she’s accepted, even welcomed, for being mixed race. Of course, when she boards the Queen Mary, she knows she has to decide one way or the other, because in the US things are much different.”

Hare’s first novel highlighted the life and times of Jamaican immigrants living in London through her main protagonist, Lawrie Mathews, who earns his living as a jazz musician playing in Soho’s music clubs by night.

Novels can be used simply to entertain, but they can also be a way of transmitting knowledge and understanding about past injustices and discrimination. For Hare, writing novels does have this other dimension. “As a writer of mixed race, I want to use my own experiences to bring colour and authenticity to my work. Unfortunately, that means talking about what it is to live as a both a person from an ethnic minority and also as a woman. It’s not a conscious decision to talk about discrimination, but it’s impossible to ignore.”

Crime is another feature that is central to the plots of both Hare’s novels. In Miss Aldridge Regrets, death and murder follow Lena into the sophisticated and glamorous life on board Cunard’s iconic transatlantic liner. Hare’s fascination with the crime genre came from, she says, “my mum’s love of crime fiction. When I was graduating from children’s books, I used to pick up whatever she’d been reading. My teenage years were spent with Agatha Christie first of all, then female PIs, such as Sara Paretsky’s V.I. Warshowski and Sue Grafton’s Kinsey Millhone.”

However, as she points out, “I’m more interested in social issues than in serial killers. You can create a lot of drama around examining the reasons why people kill. I’m not saying that their actions are forgivable, of course, but sometimes killers are just ordinary people who make a tragic decision, or who didn’t mean to end up killing their victim.”

Completing a second novel within a short time frame is an exhausting process and so one way that Hare relaxes and recharges her creative batteries is to read. “At the moment I’m reading lots of fantasy: Sarah J. Maas, Namina Forna, and Tomi Adeyemi are recent favourites. I find that there are lots of similarities between the historical and fantasy novels that I love. World building is so important in both genres, and I love taking current issues and showing them in a new light.”

About the contributor: Myfanwy Cook edits the New Voices column for HNR.