After tackling the revolt against the Hyksos in her superb Lord of the Two Lands trilogy, Pauline Gedge returns in excellent form with her latest offering, The Twice Born. The first in a two-volume series surrounding the reign of Pharaoh Amunhotep the Third, this novel traces the childhood and eventual rise to power of Huy, son of Hapu, who became one of Egypt’s most respected and enigmatic seers, renowned for his insights into the fabled Book of Thoth.

Ms. Gedge readily admits in her afterword that very little is known about Huy before he attracted the patronage of his Pharaoh; nevertheless, she manages to weave out of a few historical fragments a vivid, emotionally charged tapestry about the spoiled, intelligent son of a peasant farmer who suffers a terrible accident and is plunged into a labyrinth of deities, prescience and divination. Anchored by her impeccable knowledge of ancient Egypt, Gedge portrays Huy’s struggle to accept his destiny with conviction and an unapologetic lack of sentimentality. Her descriptions of the daily lives of the priestly and the noble castes, as well as the toils of the commoner, capture in vivid color the smells, tastes, sights and sounds of a vanquished time whose mysteries continue to captivate our imagination.

While not as well known in the United States, Pauline Gedge has long been an international bestseller, with six million copies of her books in print. With The Twice Born, she cements her reputation as one of our genre’s finest writers, capable of conveying through her evocative prose the spiritual and secular panorama of a young man who must learn to come to terms with a terrifying power capable of transforming both him and the world around him. 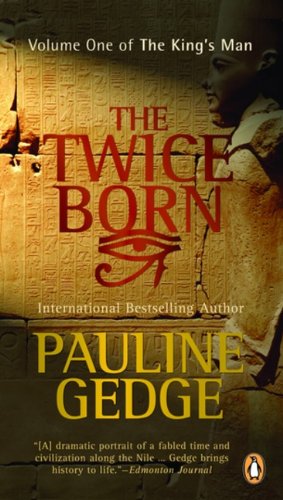