The fourth in the series of seven Esther and Jack Enright mysteries finds familiar characters in the midst of nefarious plots in Victorian London. Constable Jack has been hobbled by a broken leg administered by a runaway horse as he stepped in to save children from certain trampling. His impairment relegates him to the records room of the Metropolitan Police, where he proves to be an invaluable assistant to Scotland Yard Sgt. Percy Enright, his uncle. Jack’s wife, Esther, after enjoying a short-lived reprieve from Percy’s requests for amateur sleuthing, is again pressed into service as an undercover operative.

In this installment, the pair helps Percy find the perpetrators, and the motive, behind a series of murders in London’s East End. Laborers and former residents of the squalid Old Nichol have been sledgehammered to death, their bodies dumped in the river or the slums that are being razed to make way for new housing. The novel is based on the 1891 actions of the London County Council, which decided to rebuild Old Nichol’s more than 600 slum dwellings and relocate nearly 7000 residents. It fictionally spans the spectrum of crime from political corruption to fraud, kidnapping, assault and battery as well as murder.

A particular joy of the Enright mysteries is the dialogue. Author Field has a good ear for argot and idiom and a quick wit. His familiarity with legal machinations between prosecutors and investigators lends authenticity to plotlines. This novel has little for Jack and Esther to do, but it makes up for that by relishing Percy’s attributes. As one character noted: “you know how to break rules, you have a talent for getting up official noses, and you don’t stand for any nonsense.” A spirited and fun read. 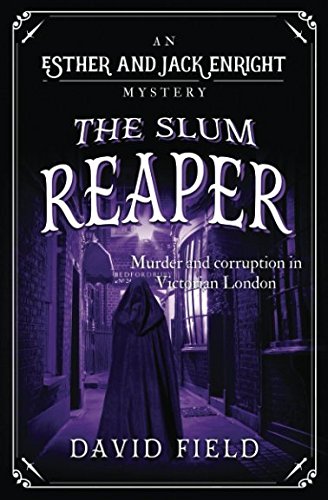