The Singer from Memphis

In this sixth installment in Gary Corby’s Athenian Mystery series, Nicolaos and his wife, Diotima, a priestess with an independent streak a stadion long, once again find themselves up to their eyeballs in international intrigue. When Herodotus, a young Greek with a passion for travel writing, hires Nicolaos to accompany him on a trip to Egypt, the investigator is hesitant. After being summoned by Pericles, Nicolaos’s employer, he changes his mind – or rather his mind is changed for him. So the trio set off for Egypt only to find themselves tracked across the sea by a Spartan assassin, embroiled in an Egyptian war to send their Persian conquerors packing, a Libyan who claims to be Pharaoh, and a mysterious singer from Memphis who is much more than she appears to be. And there are crocodiles, camels, and vast tracts of desert that make both Nicolaos and Diotima long for home. Even Herodotus’s love of travel is tested.

I’ve read every one of Corby’s witty ancient noir novels, and this is just as enjoyable as the others. His blend of history, notable figures, humor, and the tropes of noir transform his characters into old friends you sometimes want to smack up the side of the head – Nicolaos, never Diotima – and then afterward enjoy a bottle of wine with. Recommended for lovers of historical mystery and all things ancient Greek (and Egyptian and Persian and Libyan). 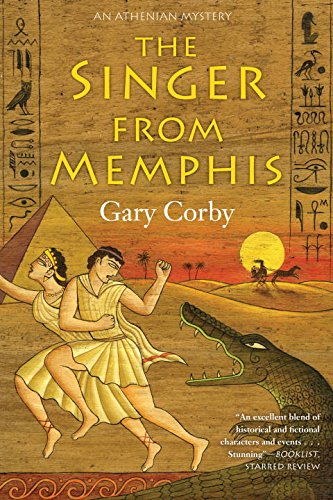