The Roman Quests: The Archers of Isca

Britannia, AD 95. Fronto, Juba and Ursula, Roman refugees from the Emperor Domitian’s murder squad, are now living in a Belgae village in Britain with Bouda, whom they rescued from slavery. It’s supposed to be a safe haven, but some villagers resent their presence, and there are rumours, too, of a possible druid uprising.

Fronto, who has autistic traits, longs to join the Roman Army. He and Vindex, his new friend, set out for the army camp at Aqua Augusta to begin their training. It’s tough but, at last, Fronto is where he wants to be. Then Juba arrives with terrible news: Bouda and Ursula have been kidnapped by druids. What can Fronto do? Desertion is punishable by death. But he cannot fail his sister…

This is the second in Caroline Lawrence’s new Roman Quests series, and it’s a gripping tale. What I always enjoy about her stories are the details of everyday life which are carefully woven into the story, for example, where people slept, what they ate, what they wore, and how they thought in the Iron Age village where the children are staying. And what, exactly, Roman Army training was like and how the system worked.

Back in Rome, the children had had a pampered upper-class Roman upbringing. Now they must cope on their own and develop their own inner resources. Fronto, who isn’t naturally brave, must learn courage; and Ursula, a bit of a wild child with an affinity with animals, must learn how to harness her gifts. Then there’s the handsome Castor, doted on by both Ursula and Bouda, whose father’s ship brought them to Britain. Will the two girls’ rivalry bring disaster? There is plenty of scope for development in future books in the series. I can’t wait. For children of 10 plus. 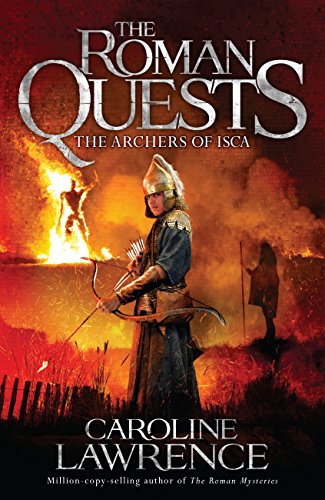