The Road to Bosworth Field

The Wars of the Roses always confused me. So many people, with so many variations of their names, all killing each other. Rarely were the reasons for all the conflict explained, and the whys of peoples’ actions were left blank. This book answers those why questions nicely, in good plain English and in readable style.

Trevor Royle has chosen not just to write the history of the Wars, but to fill in the social and religious contexts, detail the political context, and also give the reader a good sense of the world these people lived in. It’s a dense, concentrated read, which left this reader highly satisfied and much less confused. Royle is not afraid to give his opinion, but is not biased; he balances his opinions against others. He believes that in order to understand what happened you need to begin with Richard II and the actions that led to his deposition and death. That was the stone tossed into the pool, and the violent ripples from it stretched over one hundred years. Royle finishes not at Bosworth Field, but with a summary of the Tudor dynasty’s achievements and the stability they brought.

There is a most helpful appendix of all the major players, including their name variants, an excellent bibliography and a charming prologue on Shakespeare and his Wars of the Roses plays. Not a quick or light read, this book should be savoured slowly and frequently taken off the reference shelf. I hope it finds its way into every school library. 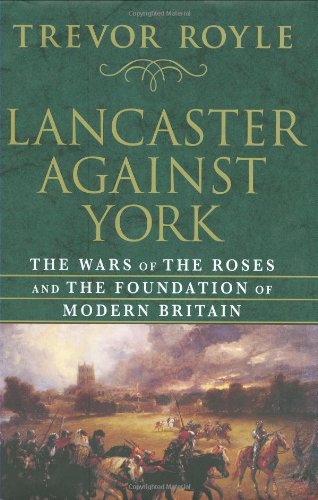