Trent marries the story of a talented dollmaker to the fate of the French queen, Marie Antoinette, who will eventually lose her head to the Revolution, set in Paris and London from 1765 to 1795. In the aftermath of a fire that destroys the family doll shop, Claudette’s parents die tragically. The young woman boards a ship to London, leaving her fiancé, Jean-Philippe, behind. Barely escaping the menacing demands of an opportunistic man, Claudette forms a fast friendship with fellow passenger Beatrice du Georges and her daughter, Marguerite. Penniless, the friends manage to gain employment in a wealthy home, Claudette industriously making extra money with the skills she has learned at her father’s side.

Eventually, Claudette’s talent as a dollmaker enables the two women to support themselves with a small shop, as Claudette’s fashionable dolls gain in popularity. When the Queen of France beckons, Claudette sails for Paris, returning to her home and her past, leaving behind a devoted man unaware that Laurent has unfinished business with her first love, Jean-Philippe. Much has changed, revolution stirring the rage of a starving public. While a delighted queen places an order with Laurent, Jean-Philippe has plans of his own, certain that Claudette still belongs to him. Caught between two countries and two men, Claudette is in terrible danger as anarchy breaks out.

Alternating between Claudette’s personal dilemmas and the unfolding tragedy of Marie-Antoinette’s reign in France, the author paints a vivid picture of pre-Revolutionary Paris, Claudette’s challenges in London and her protagonist’s ambition to create her extraordinary dolls, the art of dollmaking adding another layer to the novel. Claudette survives great danger, learning that while her history is in Paris, her heart is in London. 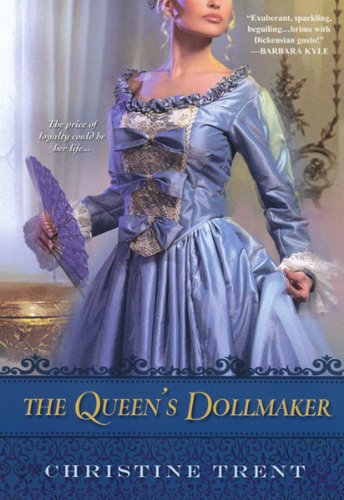