“Down wi’ the Boleyns, e’en the royal one!” is the cry of a group dedicated to the destruction of the Boleyn family, included the Princess Elizabeth, daughter of the murdered Anne. Elizabeth is spending her time under watch until her half-sister Mary Tudor dies and Elizabeth can ascend to her throne. But that is far from an assured thing, as murder and attempted murder bring Elizabeth into a conspiracy to poison her. She must discover the identity of the master poisoner at the center of it all, someone known only as She, and deal with her before it is too late. Elizabeth doesn’t want to believe her half-sister is involved — but is she?
Karen Harper does a great job of evoking the atmosphere of the stress-filled days when Elizabeth knows she has many supporters among the common folk but is still reminded most forcibly that there are others that would much rather see her dead. Adding to the strain, she is told by someone close to her not to trust anyone, even him, though she refuses to heed this advice when it comes to people who have served her for years. This is an enjoyable book, and I look forward to reading the next. 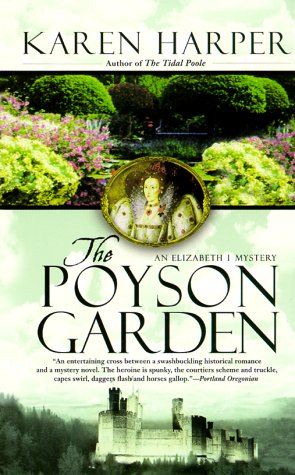