The Miracle Thief is set in France of the early 900s, a period of political turmoil, Viking invasion, and a decidedly Dark Age for women’s rights. Charles the Simple sits on a precarious throne, attacked directly by Danish forces under Rollo, and indirectly by his cousin, the Count of Paris. Charles the “Straightforward,” however, is not the focus of the novel. Instead, the story moves between the points of view of Juliana, the concubine of Charles’ youth; Gisele, the daughter resulting from that relationship; and Anna, an orphan cursed from birth by a deformed hand. Each woman needs a miracle, and the saint they petition is Catherine, whose finger-bone relic resides at the Abbey of Rochemont.

Gisele, the princess offered in marriage to Rollo as part of the famous bargain for peace that resulted in the Danish possession of Normandy, may or may not have existed historically. Iris Anthony cleverly creates a plausible historical context for a legend. In the process, she most convincingly – and starkly – evokes the powerless position of women and the disabled in 10th-century France.

Less convincing are the two rather hastily developed and concluded romances at the novel’s end. So too, occasional anachronisms crop up: the Danes ride glorious “Frisian” horses with wavy manes, Gisele hears noises “out of synch,” and the Vikings are stereotypes – all tall, blonde, bearded, wearing furs and bearing axes. In an author’s note, Anthony herself admits that the knight Andulf’s character is chronologically inaccurate. Further, characterisation is occasionally uneven and dialogue confusing.

Nevertheless, The Miracle Thief treats of a fascinating topic within a little-mined historical setting. The near magical power of saints and their relics seems to transport us to a different reality, one in which the miraculous climax of the novel is not at all out of place. 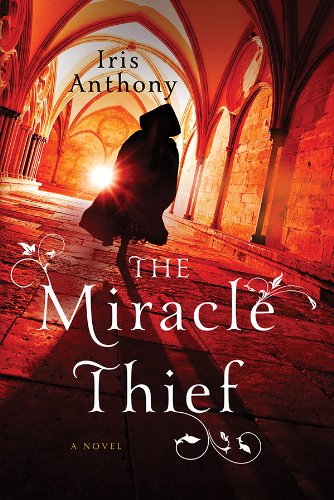