The History Keepers: Nightship to China

The third book in The History Keepers series will not disappoint its readers as the adventure continues taking Jake Djones time-travelling from Shakespeare’s England to imperial China. His quest is to track down the evil Xi Xiang who seeks to make war between east and west. Accompanied by his friends Nathan and Topaz, he also seeks to find his brother, Philip, and reveal the truth about his sibling’s disappearance.

The fast pace of this series means that the reader’s mind is swept along into each adventure by the hero Jake, who is having some attitude issues toward his mother, but who is still a hero to the core. The rich cast of supporting characters is both varied and captivating.

The time-slip element of the series allows the author the scope to place global history in perspective. For instance: the reference to the Han Dynasty existing in China at the same time as the Roman Empire. Historical detail is slipped in throughout the plot, such as references to the trade carried out by a South China Sea trading junk in 1612.

The amount of costume detail included gives the true feel for each country and period visited without it ever slowing the action or interfering with the dialogue. The emotional conflicts that Jake faces are touching and make the reader feel for him and keep following him as each new plot thread appears.

The History Keepers is a series that I thoroughly enjoy for its vivid adventures packed with constant surprises and satisfying endings. I would recommend this book for competent readers of 10+ to adult. 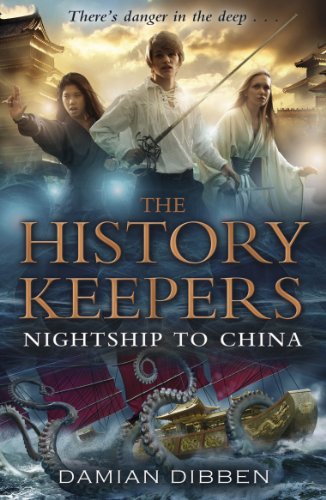