The Girl Who Married an Eagle

Julia Newton, a recent American college grad, attends a lecture about missions in Africa and decides she has found her life’s purpose. At the airport she is met by Hank, a widower and minister who will be her main contact and support. He lives with his quirky daughter, Clementine, otherwise referred to as the Great Distraction. Nine years old and very bright, she warmly welcomes Julia.

Julia finds herself teaching at an all-girls boarding school in the Belgian Congo comprised of runaway child brides from the Bashilele people. Chief Eagle is the leader of the tribe, members of whom are known both for their attractiveness and their gruesome headhunting practices. He has just chosen his 23rd wife, an eight-year-old beauty called Bukane. Bukane escapes, but in her flight she is attacked by hyenas. She is discovered by the missionaries and, after her wound heals, she attends the mission school. Shortly afterward, Chief Eagle arrives in full regalia to claim his property. A confrontation between the impulsive Julia and the arrogant Chief Eagle has dire repercussions.

The Girl Who Married an Eagle is the final book in the author’s Belgian Congo Mysteries and easily stands alone. Tamar Myers draws on her childhood experiences growing up in the Congo to dramatize this captivating story. The characters are vivid and three-dimensionally tangible. Clementine is an endearing, clever imp whose irresistible charm exudes cuteness, but her humor and bantering with adults mask an unimaginable grief. Myers captures many touching moments with keen wisdom and sensitivity, and she paints brutality and violence with an impressionist’s palette. The Girl Who Married an Eagle also provides valuable insight into the value of women in the male-dominant culture of pre-independence Congo in the 1960s. 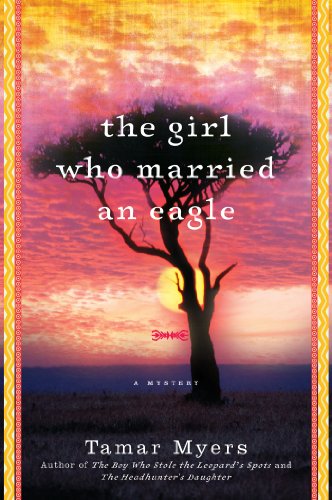