The Case of the Bogus Detective

Nevada Territory, 1863. In P K Pinkerton’s fourth mystery, our young hero, aged twelve, is thrilled when famous detective, Mr Robert Pinkerton, together with his partner, Ray Tempest, come to Virginia City. They are on the trail of some notorious silver bullion thieves. Or so they say. P K is aware that he’s a misfit; he cannot understand emotion, he occasionally gets seriously depressed, and he has a number of obsessions, like collecting different sorts of tobacco and keeping a pet tarantula. He also believes that Mr Pinkerton is his long-lost Pa.

What I enjoy about this series is that each story has its own special twist. In this one, we learn that our hero is really a girl, brought up as a boy by her Sioux mother for her own safety. P K hates dressing as a girl and much prefers her buckskin trousers, fringed jacket, beaded moccasins, and gun. In her view, being female seriously limits your options in life, like how you’re expected to behave, and she wants nothing to do with it.

The story moves to San Francisco in the 1860s, a city and port on the make, which includes an Amusements Park where P K meets Minnehaha, a feisty knife thrower, together with some old friends. At last, P K is somewhere where she feels she fits in. As with the other Pinkerton mysteries, the story goes at a gallop along and the pace is fast and furious. The scene with the stagecoach hurtling along terrifying and dangerous roads through the mountains is nail-bitingly exciting. My one niggle for future books is that a touch of sentimentality has crept in; it’s all getting a bit touchy-feely. I hope I’m wrong. However, it’s a fantastic read and children, particularly girls of 10 plus, should love it. 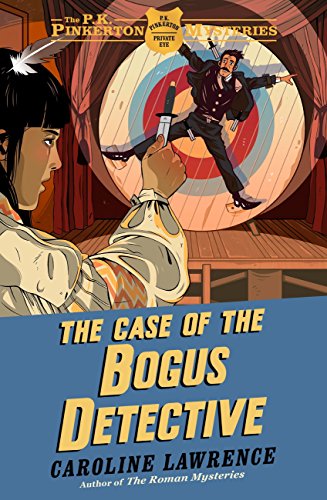