In 1187, the treaty between the Kingdom of Jerusalem, ruled by Guy de Lusignan, and the Arab world, led by Salah Ed Din, is on the brink of failure. Talon is requested to leave his home in Cyprus and return to the Holy Land to help renegotiate a truce with Salah Ed Din. Talon is known as a man of honor to the Arab ruler and, therefore, may succeed while others would fail. Unfortunately, the King of Jerusalem refuses to honor the pact made between the parties and decides to attack the Arab forces. By his decision, he has placed his army in jeopardy because he is outnumbered by the Arab army led by Salah Ed Din.

Meanwhile, Talon’s castle in Cyprus comes under attack from those who wish to recover gold that is suspected to be located on his property. An army is on the way from the sea to storm the castle. His family must also handle an attack by trained assassins who are infiltrating the castle.

Interesting characters and a plausible plot make this series a joy to read. This novel, eighth and last in the series, did not disappoint me and continues the exciting exploits of Talon and his family as they try to defend the Holy Land and their enclave in Cyprus. This adventure series provides us with a fast-moving storyline while including factual material regarding the fighting in the Middle East, which continues to this day. 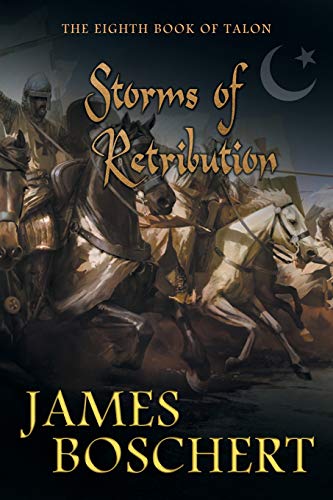