The title of this delightful book says it all: brief snippets of Saramago’s early life in Portugal, from his earliest memories through his school years. Born in 1922 in the poor village of Azinhaga to migrant workers, Saramago’s family moved to Lisbon when he was two, where his father eventually found work with the police.

Saramago retraces his family’s many moves through Lisbon, from one rented room to another, sometimes sharing an apartment with other families. Characters from these families and friends burst into life as troublemakers, teachers, or friends, then just as suddenly disappear. Saramago’s thoughts spill out randomly, with a story of courting a girl from across a balcony followed by an explanation of his family name (Saramago, which means wild radish, was added by a drunk or spiteful clerk to his actual family name of Sousa on the birth documents), which is in turn followed by a paragraph about a neighbor who went insane. Throughout, Saramago returns to Azinhaga, to the house of his maternal grandparents, and to the adventures there through which, as he says, he was finally born. The silver-barked olive trees, the dust from the crop of beans, the taste of watermelon juice running down one’s chin: everything is fantastically alive, and close enough to touch.

Saramago’s questioning the veracity of his memories – does he really remember his brother climbing a chest of drawers? – enhances, rather than detracts, from the book, as readers see Saramago’s early steps towards his later tale-telling skills. 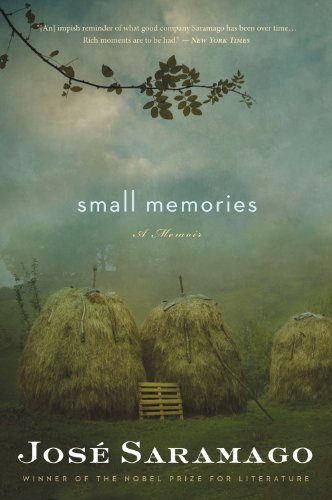