We have, in the first pages, a host of people of varying social position with confusing names, firmly in the writer’s mind and in her notes, yet they confuse the reader. Too many sections need to be read twice to gain understanding. What, for instance, does the following phrase mean to an average person: ‘choleric at the queen’s tourney…’? The main character Nicholas, is also referred to as Nick and later as Nicolo. There is a Toby, then Tobias, on the same page.

The book starts with a bang in 1599 as young actor/nobleman, Nicholas Talbot, Lord Rokesby, returns to his burning castle. After a few early and banal chapters (as with Captain Corelli’s Mandolin) the book moves forward. Nicholas, appointed ambassador to Venice by Elizabeth I, romps through Europe with his troop. Beautiful descriptions of costume, castles, rivers and acquiescent ladies abound. He meets his friend Christopher Marlowe, sometimes called Kit, who writes plays for guess who? Inigo Jones appears, stunned by the Palladian villas along the Brenta.

The few errors include Grande Canale for Venice’s Canal Grande, and anachronisms such as ‘killing glance’ and ‘gear’ for clothes. After a splendid scene at the Doge’s court, ships are built and the troop sets sail for England, only to be shipwrecked. Piracy and bullion appear. Through Oporto Nicholas struggles back via the French court, even more splendid, to an England and the frozen Thames with stalls and games.

Few 17th-century events or characters are left out. Burbage moves his Rose Theatre to Bankside to be called the Globe, and Hamlet, Prince of Denmark, is aired. But where is William Shakespeare? This book contains far too much information and too little development. It would make four books, which would be easier to read. 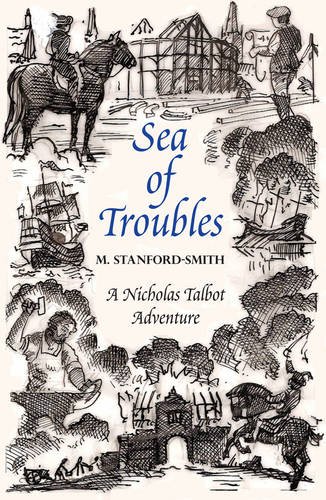