People of the Morning Star: A Novel of North America’s Forgotten Past

In the 11th century, the Mississippi River city of Cahokia is at its zenith. Hundreds of thousands of people live in this “mound society” and worship their gods; the leader of the city has assumed the personage of Morning Star, the divine hero of the tribe. A member of the ruling clan of Cahokia, he is in danger from an unknown assassin. Matron Blue Heron tries to keep the assassination attempts quiet as she tries to discover who is causing these crimes. She enlists the help of a local thief named Seven Skull Shield, while another of her clan, Lady Night Shadow Star, whose husband had been killed by a local tribe, uses the captured leader of that tribe, Fire Cat Twelvekiller, to help protect her.

I have read many Gear books over the years, but this was probably one of the most difficult of their stories to follow and remain interested in. With over 100 characters and numerous clan and spirit names, I found it hard to follow. After 20 pages, I began to highlight the character names; it wasn’t until I was about 150 pages in that I was able to follow the plot. If future books in this new series are anything like this one, I will not even waste my time reading them.

The authors are both archaeologists who know the history of the Cahokia nation. Before I read this book, I did some research about this tribe of Native Americans and found this book to be accurate in its descriptions of the people’s culture and lifestyle. If you can get by the number of characters and the side stories of their spirit gods, then you may enjoy this book. If not, I would not recommend this novel. 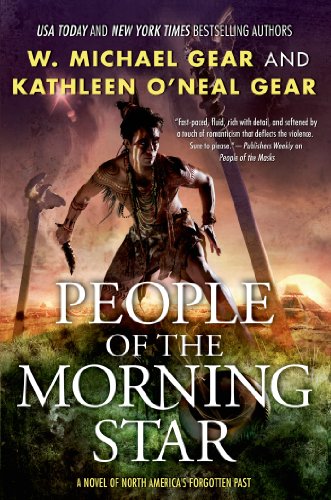